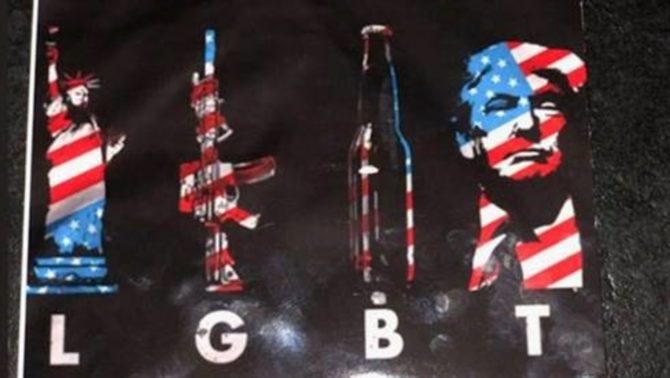 If ever there was a reason to need a drink…

Owners of several Nashville gay bars in Nashville, Tennessee have reported that anonymous sources have sent them pro-Trump flyers. Each flyer features the letters “LGBT” with images of the Statue of Liberty, a beer bottle, an assault rifle, and Donald Trump over each letter.

The action has already sparked speculation that the flyers are meant as an intimidation tactic ahead of the mid-term elections, just a few weeks from now.

“They chose to use an image of the weapon that was used in one of the largest massacres in American history at the Pulse Nightclub,” Melvin Brown, who owns and operates the Stirrup Sports Bar in Nashville, told FOX 17 News.

“Was it somebody that is sending it from a hateful place? Was it somebody trying to use it as a motivating factor with the midterm elections coming up, which is a huge possibility.”

At least four gay bars in Nashville have received the flyers, which feature Trump’s “MAGA” slogan on the reverse side. Police have traced the return addresses to a vacant lot. They have yet to identify the senders.

Meanwhile, The New York Times recently reported President Donald Trump  plans to do away with any official definition of transgenderism, which would have a detrimental effect on transgender rights. It’s just the latest attack on LGBTQ equality from the White House.