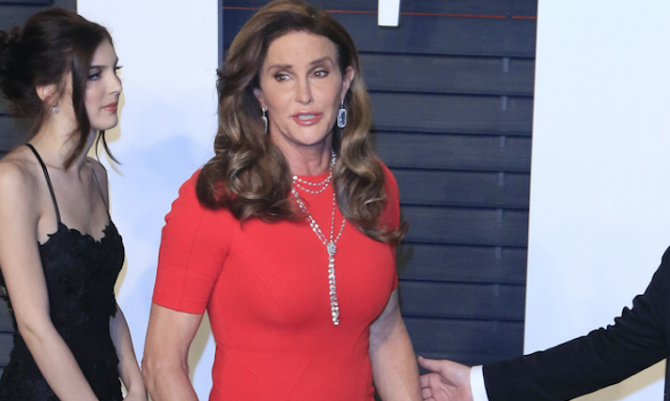 Caitlyn Jenner has repeatedly said she is not a spokesperson of the LGBTQ community, and thank god for that. Without a lick of irony, she actually told Jimmy Kimmel she’s “only a spokesperson for herself,” which may be the most honest thing she’s ever said.

And while we normally opt to tune out whichever deeply troubling way in which she’s marketing herself (and let’s not be coy, her visibility as the world’s most famous transgender person is inherently political), a photograph of her driving an expensive car in a Donald Trump “Make America Great Again” hat is worthy of a mention, given the timing.

Just last week, the president announced on Twitter that “the United States Government will not accept or allow……Transgender individuals to serve in any capacity in the U.S. Military.”

The news blindsided even those at the highest ranks of the armed forces and has been met with bipartisan condemnation in Congress.

And Jenner even addressed it on her blog:

Studies estimate there are as many as 15,000 transgender people already serving this country – and for those brave people fighting for our nation, Trump’s early morning tweets must be devastating. I believe every American should be outraged by the disrespect shown to those people wearing our country’s uniform. Furthermore, this half-baked idea puts all of our service members in harm’s way. Does President Trump intend to just pull 15,000 people out of every critical position to which they are currently assigned? That would disrupt core military missions around the world and needlessly endanger our troops.

Over the past two years I have met the most inspiring trans people, and I can testify to the trans community’s incredible resilience and perseverance in the face of enormous discrimination and hate. We are strong, we are beautiful, and we will win. The President must ask himself which side of history he will be on — and reverse his position immediately.

Jenner believes every American should be outraged over Trump’s attack, but apparently not so outraged that they stop wearing his racist, xenophobic marketing slogan across their foreheads.