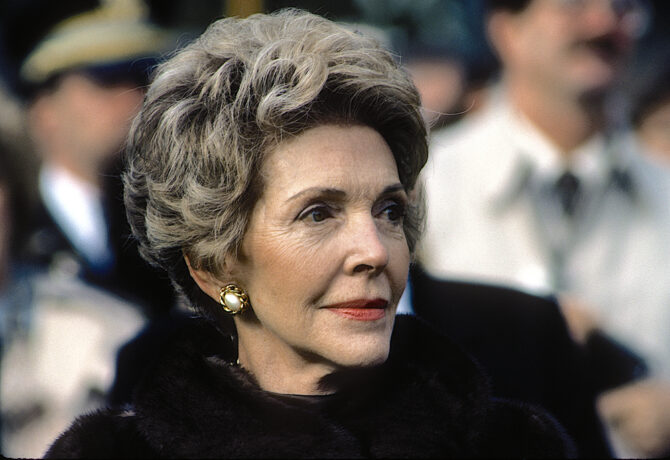 Everyone’s been talking about Nancy Reagan. And it’s, well, kinda awkward for a lot of reasons. Let’s dive into this, shall we?

Related: Nancy Reagan Abandoned Her Friend Rock Hudson As He Was Dying Of AIDS

It all started when Abigail Shapiro, the sister of antigay podcaster Ben Shapiro, tweeted a “trashy” photo of singer and HIV/AIDS activist Madonna next to a “classy” photo of Reagan, who famously turned a blind eye to the AIDS crisis in the 1980s, along with the caption, “This is Madonna at 63. This is Nancy Reagan at 64. Trashy living vs. Classic living. Which version of yourself do you want to be?”

Which version of yourself do you want to be? pic.twitter.com/Gj5M0Gqr5w

This prompted people to go digging into Nancy’s past, where it didn’t take long for them to uncover the BJ stuff.

As spotted in June by the Washington Babylon, an unauthorized biography of Nancy published in 1992 noted that Nancy “was renowned in Hollywood for performing oral sex…not only in the evening but in offices. That was one of the reasons that she was very popular on the MGM lot.” Another source is quoted in that book as saying Nancy tagged along with friends on trips to Arizona; her guy friends would pick up girls at Arizona State University, and Nancy “entertained them orally” on those road trips. A Village Voice article from 1998 also referenced the biography, and noted that Nancy “was known to give the best blowjob in town.”

Anyway, for the past several days now, this is all anyone’s been talking about…

Nancy Raegan's grandkids logging onto twitter finding out why she trending pic.twitter.com/Sjih8XxSMj

I just don’t think we should demonize Nancy Reagan for her one good quality.

Nancy Reagan when asked about the AIDS crisis pic.twitter.com/5TXotkHn7K

I can't believe what I just read about #NancyReagan. That just blows my mind. ?

When Nancy Reagan was 63, she was an accomplice in the deaths of thousands due to AIDS, as her husband engaged in murderous willful neglect.

Nancy Reagan turned her back on her own friends who were dying of AIDS, because her husband believed the “plague” was called down by God on gays for illicit sex.

So no, she’s getting these jokes hand-delivered to the bowels of hell if necessary https://t.co/s5gMZJvAn0

We’ve gotta say that this whole thing is just weird and we’re not entirely sure how we feel about it TBH. But it’s a thing that’s happening in the world right now, so we’re obligated to report on it.

The Reagan Foundation has not issued any comment on the matter.