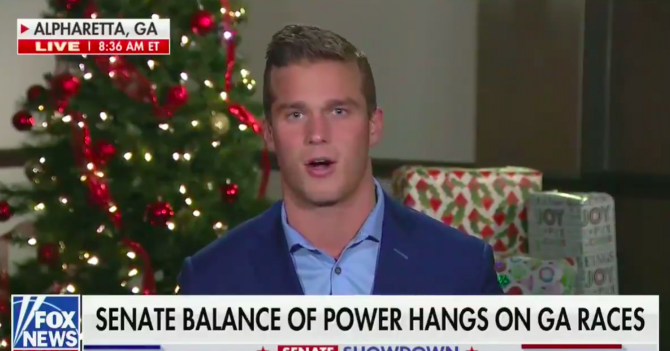 There he goes again.

Madison Cawthorn was caught making racist dogwhistles for the 424,796th time this year.

The congressman-elect from North Carolina appeared on Fox News this week to blast Georgia Senate candidate Raphael Warnock, who is currently running neck and neck against that awful homophobe Kelly Loeffler.

Cawthorn went after Warnock’s stance on abortion, questioning how he can “say he’s a pastor” when he supports a woman’s right to choose.

Related: Madison Cawthorn says he has tried to convert Jews to Christianity but they’re “very difficult”

“You see this Warnock fella who’s coming down here and disguising himself as some moderate pastor from the south,” he said, adding that Warnock is nothing more than a “radical’s radical.”

Warnock was born and raised in Georgia. An ordained minister, he currently serves as Senior Pastor at Ebenezer Baptist Church in Atlanta, the former pulpit of Reverend Dr. Martin Luther King, Jr.

But Cawthorn didn’t stop there.

“This is somebody who does not represent what real Americans believe,” he added.

The 25-year-old Nazi enthusiast didn’t elaborate on who he believes “real Americans” are, but given his past statements on “non-white males” and “very difficult” Jews, it doesn’t take much guessing.

Cawthorn then went on to warn that if the Georgia runoff goes to Democrats, the country won’t represent the interests of “most people in the United States of America.”

Again, Cawthorn didn’t clarify who “most people” are, but openly gay author and activist Keith Boykin was quick to put the young Republican in his place on Twitter, tweeting: “Unlike Madison Cawthorn, Raphael Warnock was born and raised in Georgia and is the pastor of Dr. King’s church. And unlike Cawthorn, Warnock doesn’t take trips to Hitler’s vacation home and post them on Instagram.”

Unlike Madison Cawthorn, Raphael Warnock was born and raised in Georgia and is the pastor of Dr. King’s church.

And unlike Cawthorn, Warnock doesn’t take trips to Hitler’s vacation home and post them on Instagram. https://t.co/joenTBXgrC