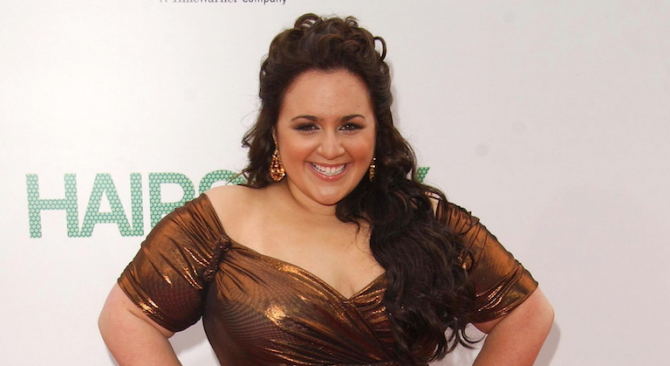 Bio: Blonsky was still a senior in high school when she found out she landed her breakout role as Tracy Turnblad in the 2007 film Hairspray, the screen adaptation of the Broadway musical. The film grossed $203 million worldwide and earned Blonsky Golden Globe and SAG Award nominations.

The actress later starred in the ABC Family series Huge and appeared in the films The English Teacher, Geography Club, and The Last Movie Star. And earlier this year, Blonsky launched her celebrity interview podcast, Nikki Nights.

Coming Out: Blonsky first came out as gay during an Instagram Live charity event Alec Mapa hosted for the Transgender Law Center, and just in case anyone missed the memo, she lip-synched to Diana Ross’ gay anthem “I’m Coming Out” in a TikTok video this June.

“My publicist, Diana, and I kept sending song choices back and forth,” she later told The Hollywood Reporter. “Then one night after Alec’s show, she messaged me at 1 a.m. and said, ‘I have an idea.’ I told her to lay it on me. ‘How about a TikTok?’ I instantly said that I’m so down. We filmed it at her husband’s surprise socially distant birthday party where everyone was sitting six feet apart in a backyard. Diana said, “Why don’t we do it right now?” That was that.”

How Her Family Grew: By publicly coming out as gay, Blonsky forged a new bond with her LGBTQ+ fanbase. “The LGBTQIA community has embraced me since the moment I got Hairspray,” she explained to THR. “They welcomed me with open arms and I felt so a part of the community already. For me, it was a long time coming. I was wanting to date women and it just was a moment in my life where I was finally just really ready to be myself.”

Blonsky has performed at Pride and LGBTQ+ events for years, though. “Yeah, was I not dropping hints the whole time? Like Hansel and Gretel dropping bread crumbs everywhere,” she told the magazine. “The love and support that I’ve been getting from the community, I don’t know if I would have been able to do it so loudly and in such a way without that.”

“I’m a person that no matter what life throws at me, I will always find a reason to smile and laugh because I think as scary and as dark as life can be sometimes, there are so many beautiful things out in the world,” she concluded. “If we put out good and positive, then good and positive will come back to us.” – Nikki Blonsky to Showbiz Cheat Sheet