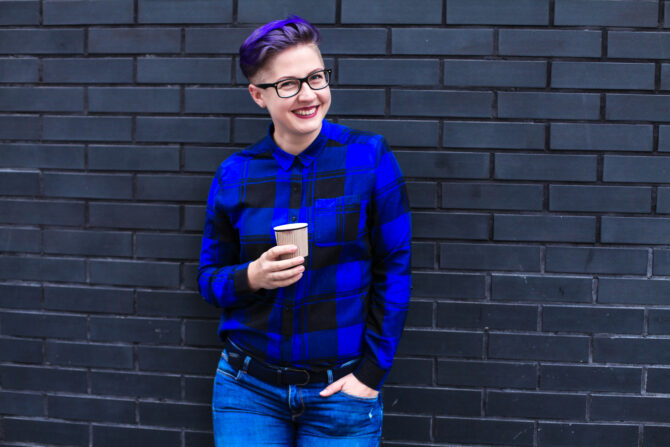 Getting an androgynous haircut as a non-binary person can be absolutely liberating! For a lot of NBs, it’s just one step closer to presenting yourself the way you want. But it takes time to find the right haircut, and there’s often a lot of trial and error involved. In this article, we’ll show you 10 sexy NB haircuts to fuel your inspiration!

RELATED: Whether You’re Gay Or Straight, The Naked Barber Will Shave You Anywhere You Want

What’s The Difference Between An Androgynous Haircut And A Non-Binary Haircut?

Androgynous haircuts are commonly worn by people of all across the gender expression spectrum. In fact, some would take issue with the very idea of haircuts being specifically gendered at all! Is a man bun really feminine? Is a buzzcut on a woman really masculine?

With that said! There is certainly a lot of crossover between haircuts that are deemed to be ‘androgynous’ and the type of cuts that non-binary people like to wear.

Originally made popular in the ’50s, and as seen on the movie “Grease,” this slicked-back style actually works well as a fashionable androgynous look. Funnily enough, the comb-over gained popularity in traditional times as a way for men to conceal their bald spots. It gained a bit of a style revival recently due to “dappers” looking for a classy hairstyle.

If done right, the sleek comb-over side part look can be both sophisticated and slightly masculine, thanks to its sleek, deep side-partings. You can mix up the look and give it a modern twist with an undercut or a side shave. It is also recommended to set the hair in place with a pomade for that suave look.

Another vintage look with a modern twist is the retro curly fringe cut. This hairstyle is perfect for those with naturally curly hair, or those looking to try an androgynous, curly hair look. Curly or wavy hair can give gender neutral hairstyles that extra flair if you’re bored with straight (pun intended) hair.

Don’t fret if you have naturally straight hair, you can still make this look work by using a curling wand. Keep the curls in place either with a wax or a light pomade. Refrain from using water-based products because it doesn’t retain the curls as efficiently or for a longer period.

#3: Pixie Cut With A Taper Fade 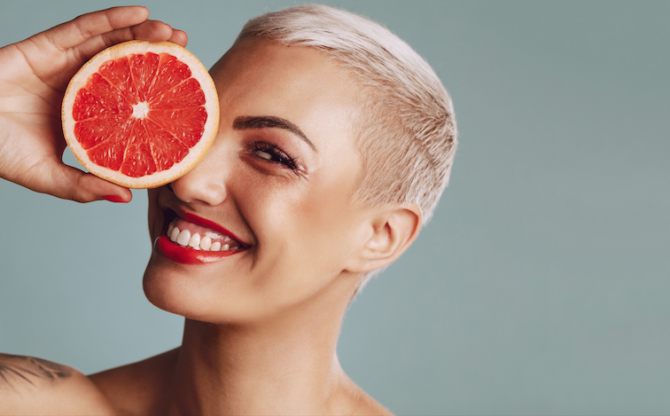 A pixie crop or pixie cut, made popular in the 50s by Audrey Hepburn, is not just a hairstyle for women as some would believe. One can turn this simple yet bold haircut into a more gender-neutral hairstyle by adding a tapered fade at the end. You can do this by making the pixie cut end when it reaches the skin — or “fading” in with the hairstyle.

A tapered fade adds that traditionally masculine look to a typically feminine cut. This androgynous version of the pixie cut is usually ideal for women with straight hair. It is also a great low-maintenance look that can work for both casual and formal occasions. The pixie cut with a tapered fade can fit any face shape, although this cute, non-binary haircut looks best on oval, heart-shaped, or round faces. 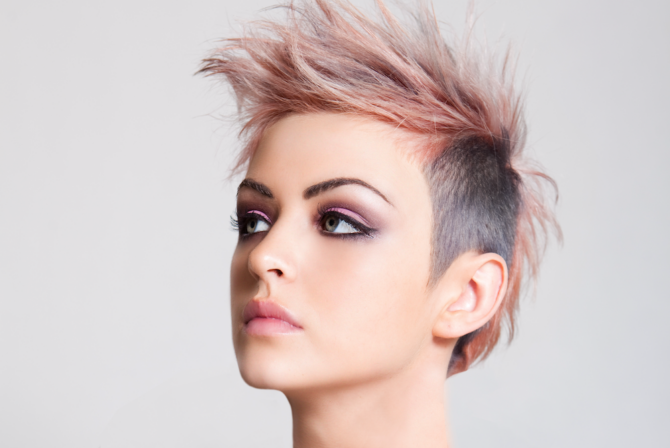 The punk look is always a fun androgynous hairstyle to try. More than just being a popular fashion and music subculture, the punk look is one of the best ways to express oneself and show your individuality. If you want a more edgy, gender-neutral hairstyle to showcase a little bit of your wild side, you can opt for a punk androgynous cut with lines on the side for that extra oomph.

If you prefer an androgynous haircut with more texture, you can experiment with a longer length in the crown area paired with a layered fringe. To achieve this look, use a light wax to shake out the hair, then take it a step further by shaving one or two horizontal lines right above the ear to give the punk look an even more modernized look. 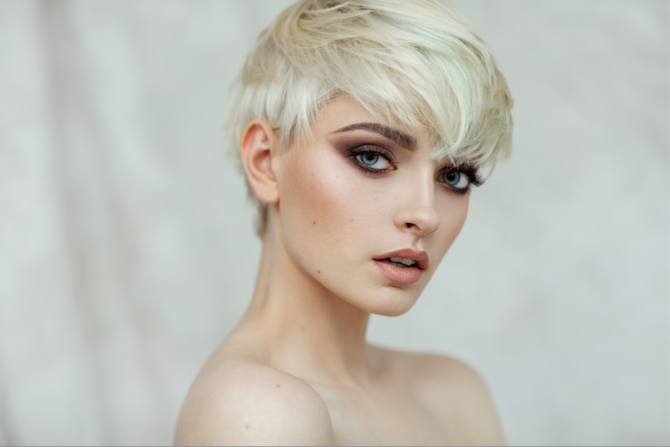 Another low-maintenance androgynous hairstyle you can try is the crop cut, then give it an extra flair by going blonde or dirty blonde. The crop cut is a short and textured hairstyle that can be adorned with a blunt fringe in the front, which can also help cover up a wide forehead area.

Going blonde (or dirty blonde, depending on your style) can also give this minimal and masculine hairstyle a more edgy, feminine look. This cute gender-neutral haircut is not just for people donning straight hair. Curly or wavy-haired NBs can also try a textured cropped haircut to showcase their wavy and curly strands. 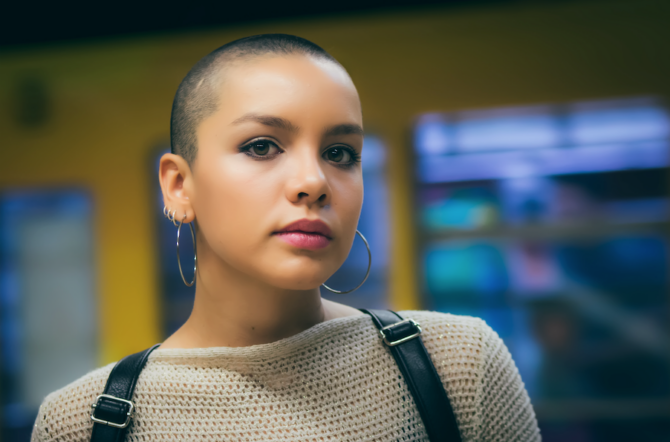 One of the more daring hairstyles in this list is the buzz cut, and rightfully so, because you’ll be shaving almost all your hair. The buzz cut was originally popularized in the military given its low maintenance nature. People who go for buzz cuts prefer closely shaven sides until the back of the head.

One thing to note about this extremely short haircut for NBs is that it will really highlight the shape of your head. You can mix a buzzcut up by leaving a slightly longer hair on top for more of a crew cut, and then adding some loud colors like red or blonde, or adding a design through shaved lines. Whatever your style is, you can explore and play around and use a buzz cut as a base. 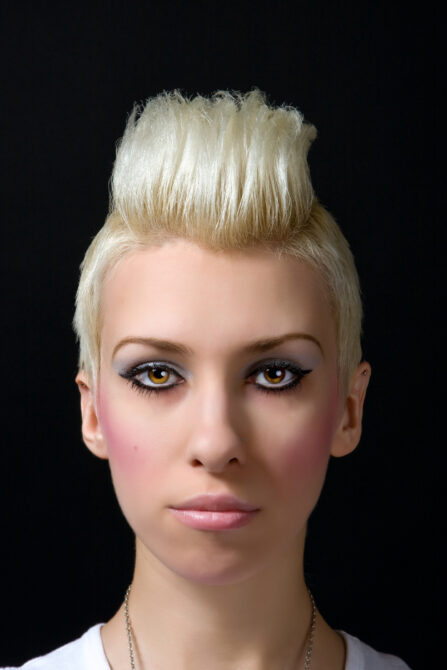 A gender-neutral haircut that is more on the extreme side is the mohawk, especially if you work long spikes into the look. At its core, the mohawk is retaining a strip of hair in the center of the head while keeping the sides shaved. The punk version incorporates long (and sometimes colored) spikes to amplify the fierceness of this hairstyle.

If you prefer a more subtle, and tidier look, you can do so by tapering it until it fades into the sides and the back. You can also try a disconnected undercut for a bolder look.

The quiff hairstyle (or a more subtle, simpler version of the pompadour) came to be known in the 50s thanks to it being known as the Elvis haircut. It started as a very masculine look but then eventually grew popular with women starting in the 70s and up until today. The quiff is actually a combination of several popular hairstyles which are the pompadour and the flattop.

Although sometimes the mohawk gets thrown in the mix. Before getting a quiff, it is recommended to grow your hair out to a certain length to allow the barber to have something to work with. The quiff works with different kinds of face shapes and can be worn slick or messy, depending on your style. You can experiment using an alcohol-based type of hairspray to set it in place, versus gels that can pull the hair down.

Last but not least is the classic textured pompadour. If you have thick hair, you may want to explore this upright androgynous hairstyle as heavier hair is more prone to rise when cut short. This fancy-sounding hairstyle was named after the infamous Madame de Pompadour (a mistress of King Louis XV) albeit her hair had nothing to do with the look. Pompadour hair has a lot of volume in the front of the head which makes it look quite majestic. This look is not recommended to have the part on the side given its bulky nature.

Gender-Neutral Haircuts: You Do You!

Hair is such a big part of your look, so it pays to experiment and find flattering cuts that work for you. We hope this guide has given you a few great ideas to work with! Go rock these cute non-binary haircuts and effortlessly switch between gender expressions.

RELATED: When A $50 Haircut Makes You Feel Like Royalty