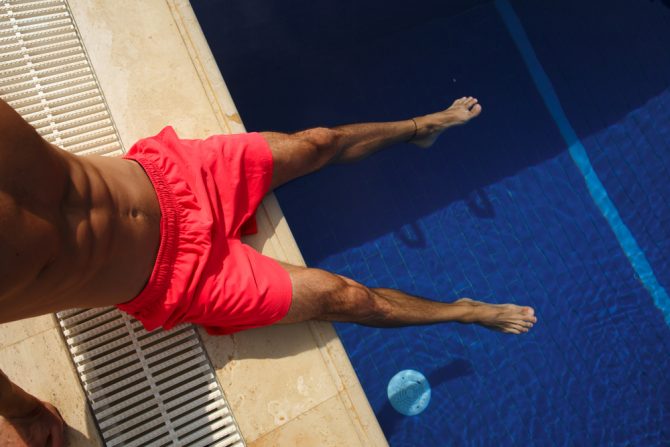 This week, the 20-something Georgetown University student had to put out a statement saying he doesn’t know anything–nothing, nada–about those “racy” photos of Falwell Jr. that everyone’s been talking about. He also asked people to stop calling him a “pool boy,” as he finds the term demeaning.

Granda’s attorney, Aaron Resnick, told Miami New Times that his client has “no idea about the alleged ‘personal photographs’” of Falwell Jr. and that he definitely isn’t the person who tried blackmailing the evangelical leader, adding that any reports suggesting otherwise are “absolutely false.”

Meanwhile, an attorney for the Falwells has called the whole story “not accurate” and insists “there are no compromising or embarrassing photos of Falwell, period!”

But the statements have done little to quell the chatter on Twitter.

Jesus loves me, this I know, because Jerry Falwell Jr may have sent the pool boy some dick pics yo.

I can’t help wondering who enjoyed the “friendship” with the pool boy more. Falwell or his lovely wife.https://t.co/V5URjQ86Vg

Mmmmhmmm, I reckon the Bible says one man ought not lay with another. But if a man lays with his wife and a pool boy…and his wife takes pictures of him making out with the pool boy…well, I reckon the Good Lord probably thinks that’s okay….mmmmhmmm. pic.twitter.com/9gb1Q0KPWf

1. Pool boy had photos of himself with Jerry Falwell, Jr. and wife;

2. Falwell calls Cohen to fix it;

3. Cohen flies to FL to talk w/ pool boy’s attorney who then claim all photos were destroyed;

Here are some more…

Good move by the writers, as the drama threatened to get bogged down in legalistic disputes over who can testify to Congress when, to introduce the Jerry Falwell Jr. racy photos device, nicely foreshadowed last season by the inconclusive pool boy story.

Does your beard hide your shame or your pool boys’ DNA?#FakeChristian

You’re not suggesting that Jerry Falwell Jr and the pool boy were having sex, are you? That’s shocking. You should be ashamed of yourself for even thinking it.

But was he a Dancing Pool Boy? pic.twitter.com/gjzxz0wf3N

.@jerryfalwelljr blocked me but I hope he sees this:

I support you, Jerry!

Your sexual relationship with him is NOBODY’S BUSINESS

Statement: Jerry Falwell Jr. did not pay money to Michael Cohen but he’s well aware Donald Trump‘s fixer did him a favor & tried to negotiate the return of graphic sexual photos during 2016 campaign. Falwell returned favor dumping Cruz for Trump. Cohen retains one photo as proof.

I know I shouldn’t take any joy from the whole from the sex pics/pool boy scandal that surrounds Jerry Falwell Jr… but I do. So much delicious joy. Nom-nom-nom.

Subscribe to Queerty for a daily dose of #politics #jerryfalwelljr. #pics stories and more