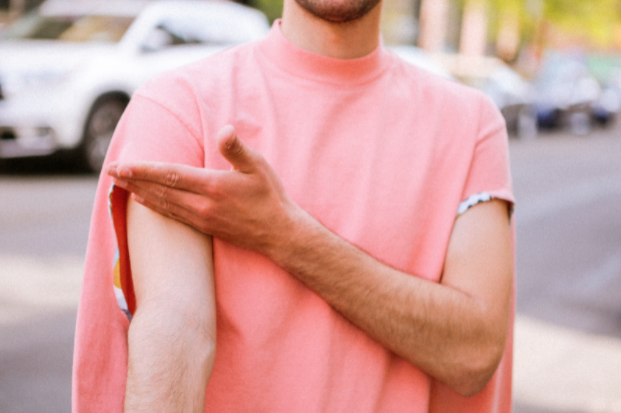 In December, gay designer Jordan Star launched bubuleh, a sustainable brand with clothing “made with love and just a little anxiety.” The new brand – with a name that roughly translates to sweetheart in Yiddish – pulls inspiration from his Jewish heritage, family, and identity as an LGBTQ Jew, and puts older ideas into conversation with newer styles.

Star says that, in many ways, he’s found his Jewish and queer identities to be complementary in terms of shared values and the joint emphasis on community, and has always felt that it’s vital for him to be out and proud as both.

One way he’s doing that is through fashion, and specifically through his new Holey Collection (a play on Holy).

Traditionally in Judaism, modesty and covering up are often associated with holiness, especially for women. In other practices, there’s an emphasis on binding, like the traditional Jewish practice of laying tefillin, in which men wrap their arms and forehead, in prayer, as a reminder of their daily dedication to God.

Star says these themes of covering, or binding, are prevalent in other practices and traditions as well – but due to different reasons which both Jewish and LGBTQ people know all too well.

Both groups know that covering is sometimes necessary for safety. It’s not always possible to be out and proud. When it comes to visibility, it can still be dangerous for two men to hold hands walking down the street, and even for someone to wear a yarmulke in public given the increasing rate of anti-Semitic crimes. Star notes that in his hometown outside of Boston, a local temple was recently burned down in an anti-Semitic crime.

As someone in both communities, Star says these varying – and sometimes contradictory – concepts of holiness, visibility, covering, revealing and binding are ideas that he thinks a lot about, which inspired him to create this new collection.

And as of last week, the collection has come to life. Holey is a genderless, three-shirt collection that showcases “the upper arms where many folks traditionally place tefillin, and uncovers that space in celebration of both the beauty of our individual bodies and our relationships to where they come from.”

Each cotton top is 100% handmade in the US and sweatshop-free, and you can use the code QUEERTY15 for 15% off any top in the Holey Collection.