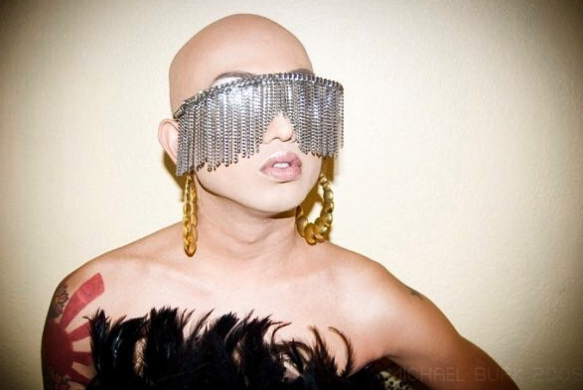 It’s been almost a decade since RuPaul’s Drag Race made it’s debut, but a few of those original queens still hold a place in our hearts.

One such queen, Ongina, made her mark in herstory when she revealed to the world on season one that she is HIV positive. Since then, the iconic bald performer has gone on to tour around the world, become a HIV awareness advocate and has spread a message of strength and self-love.

But how did all begin? During an interview with Hey Qween’s Jonny McGovern, Ongina talks all about her journey to the legendary runway and life after the cameras stopped rolling.

“It was around 2001 and I was living in New York City,” says Ongina on her early days in the New York club scene. “I was partying in APT and I was seeing people like Glenn Moore and Kevin Aviance and it wasn’t drag per se, it was just giving looks.”

It wasn’t until a few years later, when she started working at Lucky Cheng’s, an Asian fusion restaurant with drag queen servers, that she really started playing with the art of makeup and female illusion. Interestingly enough, Ongina reveals that back then she worked there alongside Trans icon Laverne Cox.

But like many performers, Ongina’s sights eventually settled on Hollywood with hopes of becoming a star.

“People that move to Hollywood are here to be something and when I was coming here I was like ‘I want Ongina to be famous’ like as a joke… but not really.”

“In 2006 I moved to Los Angeles where I started working as a visual merchandiser for this company called Intermix,” she says. “But when I moved here I actually stopped doing drag.”

“It was a year after I found out I was HIV positive so there were a lot of personal things I had to overcome and work through,” she reveals. “So when I got here I became so busy with work that I actually put Ongina away.”

It wasn’t until one fateful night in Downtown Los Angeles when another soon-to-be Drag Race star, Raja, was performing for a packed house.

“I don’t even remember what the place was called, but Raja was performing,” she says. “Now I had never heard of Raja, had never seen her, but when I saw her I instantly knew I wanted to do drag again.”

“It was just one of those moments where this creative genius had reignited this fire inside me.”

Soon Ongina was back on stage, wowing Los Angeles audiences. As fate would have it, one of those audience members was casting for a new reality competition show called RuPaul’s Drag Race.

Unfortunately for that casting agent, Ongina wasn’t exactly interested in doing the show.

“So there was this one lady, she was super sweet, but she harassed me for like three weeks and I saw her everywhere,” she reveals. “She was really persistent, she was not going to take no for an answer. But I told her, ‘No. I’m not a drag queen and that sounds really intimidating.’”

After weeks of asking, Ongina eventually gave in, filming two hours of tape for what was supposed to be a five minute audition video. After viewing the tapes and bringing her in for an in-studio interview, producers offered her a spot.

As we all know, Ongina did not end up winning the crown that first season, but what she did win was the hearts of fans all around the country.

By making her HIV status known to the world she showed viewers everywhere that you can do anything even when faced with hardships and tragedy.

“It was a very emotional roller coaster ride, it was overwhelming and it was something that I never thought I would have to carry on my shoulders, but I did it proudly.”

“I put myself out there and I was overcome with emotion. And all of those emotions were for me, I let it all out for me, it made me feel better and I was finally able to say it out loud.”

“At the time only a few people knew, even my parents didn’t know at the time. I didn’t know it was going to reach a level that it did, where people where inspired by what I did, I was just blown away.”

She adds, “The universe has given me the opportunity to do all of that and it is amazing and it has changed my life forever.”