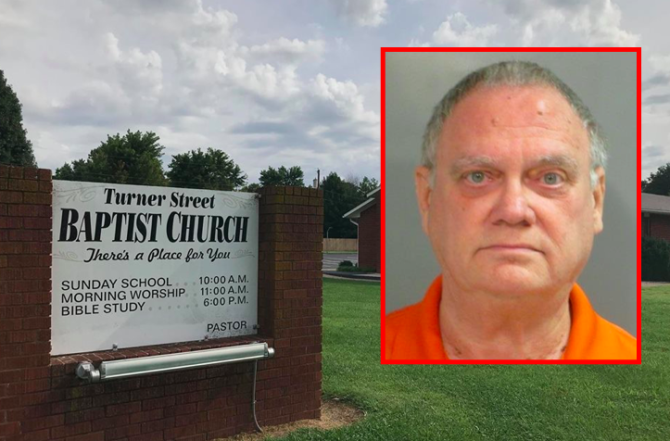 Here we go again… again. Yet another antigay pastor has been busted for soliciting a minor for gay hanky panky.

67-year-old Timothy Lee Reddin is the pastor at Turner Street Baptist Church in Fayetteville, Arkansas, where he regularly preaches about the evils of homosexuality. He was busted on August 3 after engaging in sexy talk on a website with someone he believed was a 14-year-old boy.

Turns out, that little boy was actually an undercover cop.

Reddin arranged to meet the child for sex. When he arrived at the meeting spot, he was met by officers.

Police also say they made contact with Reddin a few days earlier on another website, on July 27.

“Lee” described himself in his profile as a 62-year-old white male, 6’1″, 215 pounds and married. The profile description said, “I just wanna have fun…I like younger guys. But hell, at my age that’s just about everybody! Discreet, intelligent, witty, professional guy. Love to meet new friends. Especially naked ones,” according to the affidavit.

Reddin, who’s been married for nearly 50 years and has four grown children and seven grandchildren, was booked in his local jail where he was charged with attempted coercion and enticement of a minor.

But here’s the thing. It’s the second time he’s gotten himself wrapped up in this sort of thing.

In 2000, Reddin was convicted for possession of child pornography. He spent 27 months in prison and had to register as a sex offender after being released.

In to his online bio, Redding writes: “My identity and status is rooted in being a sinner saved by God’s grace and a son in His forever family. Nothing else matters compared to that!”