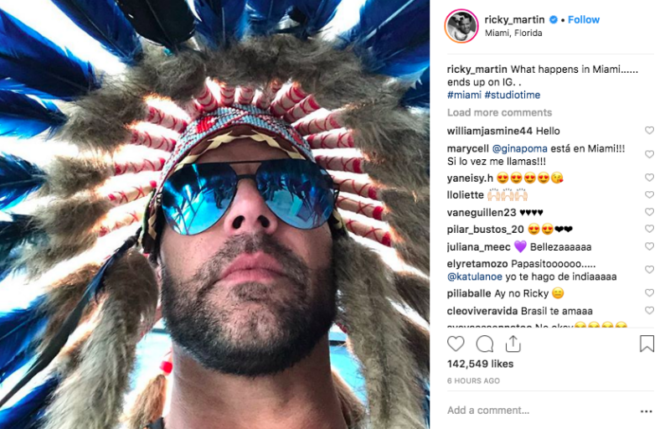 Ricky Martin just experienced what might be the biggest backlash of his career, and it had nothing to do with his sexual orientation. In fact, it far exceeds any fallout that rained down on him when he came out in 2010.

What did Martin do to upset the peanut gallery? He didn’t sexually harass anyone, use a racial slur, lip sync “Livin’ la Vida Loca” on a Macy’s Thanksgiving Day Parade float, or get caught wearing fur. His high crime: posting a photo of himself wearing a Native American headdress on Instagram.

What happens on the Internet stays on the Internet, and once you’ve been called out for cultural appropriation, the stench stays with you forever. Just ask cornrow-loving reality-TV star Kylie Jenner.

Frankly, I’m kind of over it. “Cultural appropriation” has become like the new “Communist,” this overarching concept that’s been overused and beaten to death, to the point of the term losing much of its impact.

I understand the grievances behind it. Plundering cultural and historical artifacts from cultures historically plundered for land and power can be as much depreciation as appreciation. But white European history is so messy. There’s scarcely an outside culture that white Europeans didn’t plunder at some point before borrowing–or, some would say, stealing–from its food, fashion, and art.

If I were white, I’d probably find it next to impossible to get through a day without committing some form of cultural appropriation. I don’t want to dismiss those who are offended by it the way some dismiss those offended by racism, but a lot of people are throwing stones from glass houses.

While a Native American headdress and sunglasses wasn’t Martin’s best look, it was hardly a reason for social media’s etiquette police to pull out their Tasers. Was it cultural appropriation? Well, maybe… sort of. But he was wearing a fashion accessory in a random photo, not padding his coffers by performing an entire concert decked out in Native American regalia or promoting an album of Native American songs.

And if you think about it, cultural appropriation is ubiquitous? It’s part of our diet, our sartorial choices, the music we listen to (from the reggae lilt of The Police to the African rhythms of Paul Simon’s Graceland to the Latino mood of Lady Gaga’s “Alejandro”), and the TV and movies we watch (Madonna in Evita, Johnny Depp in The Lone Ranger, and even The Golden Girls).

Should white rappers, blue-eyed soul singers, Taco Bell, and American retailers selling kimonos, saris, and sarongs and American instructors of yoga and Asian martial arts cease and desist because their livelihoods are tied to culture from communities that suffered under the racist and imperialistic actions of white regimes?

Should consumers stop shipping all of the above? Should I banish Dusty Springfield and Lisa Stansfield from my Spotify playlists because white British divas shouldn’t sing like black American women?

There’s a big difference between imitating another culture and mocking it. Blackface is deplorable because of the racist history behind it. I put playing Cowboys and Indians or using it as a party theme in the same league as Confederate statues. In a sense, it celebrates centuries of racist genocide.

If Martin had posted a video of himself wearing the headdress and shaking his bon-bon while doing a rain dance, he would have been entering the realm of mockery. But his simply wearing a Native American headdress in 2018 is less problematic than Village People’s discofication of Native American identity via its resident “Indian,” or Cher’s sex-ing it up in her “Half Breed” video in the ’70s.

(Fun fact: The 1973 hit was about the trials and tribulations of a young woman of mixed white and Native American heritage, which, unlike Village People’s Felipe Rose, Cher was not.)

One argument I read pointed out that the headdress is a sacred ornament in Native American culture, and only select members of any tribal community are allowed to wear one. As beautiful as that custom sounds, I don’t believe Ricky Martin or any non-Native American is obligated to defer to it any more than I, as a non-Catholic, am obligated to defer to the Pope’s disdain for the crucifix.

In the end, it’s all about context. While it would have been ideal if Martin had offered some historical context or acknowledgment of Native Americans in his Instagram post, his headdress isn’t on par with, say, a hijab costume. Considering the widespread anti-Muslim sentiment at the moment, that would be the height of impudence.

But when does fashion cease to be fashion and becomes a symbol of arrogance and ignorance? Do we need the blessing of the culture we’re appropriating? How do we obtain it?

Five years ago, I went on a desert safari in United Arab Emirates and some locals insisted that I pose for a photo while wearing the traditional white robe and turban. Do I get a cultural-appropriation pass because I had their blessing while the tourist who acts alone doesn’t? 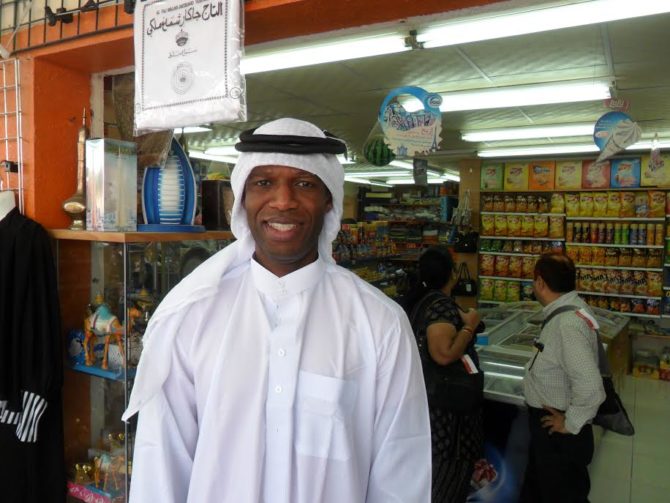 I don’t believe one needs permission to pay homage to the style of another culture, which is what Martin probably thought he was doing. In this age of race and culture wars, there are plenty of things more deserving of outrage. Someone wearing a Native American headdress while acting out broad Native American stereotypes would qualify. That would be as disturbing as white kids trying to talk and act “black” without any interest in or understanding of the challenges black people face.

Martin’s feathery headwear, though, really wasn’t that much different from the tattoo of my first name in Thai script on my right forearm, except unlike his Instagram pic, I can’t delete my ink with one click. I’m thankful for that because cultural appropriation or not, it’s a symbol of my deep appreciation for a country where I lived on-off for several years. I intend to wear it proudly forever.