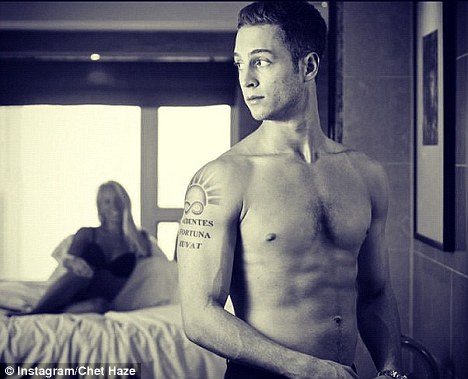 We loved seeing Colin Hanks do a self-deprecating cameo on a recent episode of ABC’s Happy Endings. And we enjoyed Orange Country—what we can remember of it. But poor Colin doesn’t have anything on his hottie half-brother, Chester–a.k.a. rap wunderkind Chet Haze—who just released some smokin’ selfpics on Twitter.

The tagline read: “Ladies… This is for you.” After getting some come-ons from girls and guys, though, Chester tweeted, “Yo, Shout out to ALL my fans—both straight and gay… #humbled but just so you know I’m straight lmao Ok Thanks.”

After his Twitter feed blew up Sunday night, Hanks, 21, tweeted, “Wow, 300 new followers overnight? Lol, I should have took my shirt off a long time ago”

The younger Hanks—the eldest son of Tom and second wife Rita Wilson—is currently a college student and aspiring rapper. He changed his name professionally in order to forge his own path in the creative world.

Hell, he can call himself Cheddar Hangs for all we care!

Click through for more photos of Chester Hanks/Chet Haze