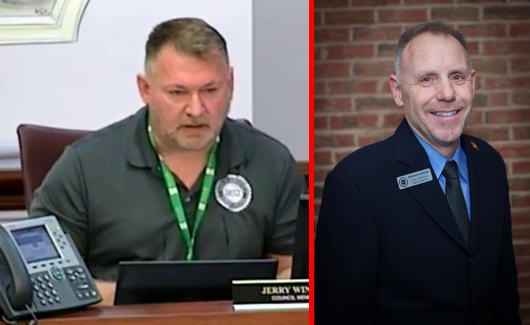 Earlier this week, out politician Jerry Windle abruptly resigned from his seat on the Morrisville Town Council in North Carolina halfway though his four-year term, claiming he was sick and tired of being bullied by his homophobic colleague while his other colleagues did nothing to stop it.

In an emotional statement given at a town hall meeting on Monday, Windle, who was first elected in 2017, told his fellow council members, “I cannot in good conscience serve on a council that has knowingly allowed me to be bullied and harassed when it could have been stopped more than a year ago.”

After Queerty wrote about the story yesterday, Windle took to the article’s comment board to offer clarity a few points, as well as offer more information on what he says happened.

“I did not resign because of the antics of one person,” Windle wrote. “I resigned because the Mayor and other Council members would not call out publicly what they witnessed occurring on more than one occasion.”

Queerty originally didn’t know the name of the person Windle claimed was spearheading the homophobic abuse against him; however, he now alleges it was fellow council member Michael Schlink.

“I have gone on record about this many times before my resignation,” he wrote. “The majority of people of Morrisville know the person.”

According to the Town of Morrisville’s website, Schlink was first elected to town council in 2011 and was reelected in 2015.

Windle added that there are seven members on the town council. Six of the members have been “very aware” of Schlink’s homophobic behavior, which he says happened during his campaign, where it was witnessed by town residents, and at town retreats, where the Mayor and other council members were present.

“They have all heard him,” he alleged. “I stood strong when no other member of council would speak publicly. I lodged a complaint with the Mayor and he just wanted me to ‘turn the other cheek.’ When it was obviously not going to end, I spoke up publicly.”

He continued, “In turn, I had several of [Schlink’s] supporters spew half-truths and lies before council–attacking me for telling him to stop. No Council Member came to my aid–to my support. This is why I resigned.”

Finally, in response to people criticizing his decision to walk away from the situation, Windle had this to say:

Until you have lived a year asking your Mayor and colleagues to bring the cursing/name calling that was done behind closed doors to an end, you just don’t realize the impact–again it was the inaction and passive allowance of reprehensible behavior that made me decide to resign. I chose not to work in a toxic environment. I can serve the public in many ways.

Windle concluded by saying, “I hope you can imagine yourself in a similar situation, and see it a little more from my eyes.”

Queerty has reached out to both Mayor TJ Cawley and Council Member Michael Schlink for comment but did not hear back by press time. We will update the story if a comment becomes available.

UPDATE: Schlink has responded to Queerty’s request for comment by saying the allegations made against by Windle are “false” and “baseless,” stating, in part: “Anyone who knows the racial and sexual orientation of my family members, my record of leadership in the military, and my years of service in local government, including authoring and sponsoring the town’s first gay pride proclamation last June, knows these contrived homophobic and racist accusations are ridiculous.”

Related: Politician resigns halfway through term because he can no longer take colleague’s homophobic abuse