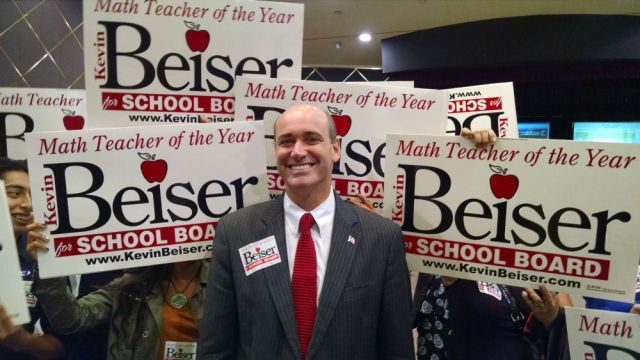 Kevin Beiser is an openly gay middle school teacher and trustee on the San Diego Unified School District who recently launched an exploratory committee for a potential City Council run.

His future political ambitions may have just been derailed, however, after not one, not two, not three, but four men have accused him of sexual misconduct.

“I was violated,” Crawford tells Voice of San Diego. “Was I raped? No, I don’t think I was raped. I’m not scarred for life. But I’ll never forget it.”

He said he kept his eyes closed tightly the entire time. Then Beiser lay next to him and masturbated. When he finished, Crawford said, Beiser leaned over and pried his eyelids open.

Three other men, all of whom are involved in local San Diego politics and in the beginning of their careers, also detailed alleged encounters with Beiser to Voice of San Diego.

One of the accusers, being referred to as simply John Doe, recently filed a lawsuit against him alleging sexual assault and sexual harassment.

According to the suit, Beiser invited him out to JR’s Bar, a popular gay bar in Washington, D.C.

Beiser said he would be there with friends, according to the lawsuit, but it was just the two of them for most of their time. Doe got drunk, he said, thinking Beiser was doing the same, but he now believes he was the only one drinking.

“When (the former campaign manager) was incapacitated by alcohol, Mr. Beiser took him to a hotel and sodomized him,” the complaint reads.

The complaint alleges that the next morning, Doe expressed regret over what happened, and that Beiser then promised him work once they got back to San Diego. It says that this felt to the campaign manager like a quid pro quo offer in exchange for not taking legal action.

The suit also alleges other unwanted sexual advances made over the course of several years, including Beiser offering Doe oral sex and full-body massages, encouraging him “to hook up with gay dudes,” replaying the sodomizing incident in D.C., and inviting him over to skinny dip in Beiser’s pool and hot tub.

Doe said he “continually” told Beiser “I’m not interested, I don’t want this,” and that it made the work environment very “uncomfortable.”

“It’s kind of like, he’s creepy, I just kept patting him off and he was tolerable,” Doe tells Voice of San Diego.

“Due to the heinous nature of the allegations against SDUSD School Board President Kevin Beiser, the San Diego County Democratic Party Central Committee will consider a resolution calling for his resignation tonight,” party leaders said in a statement.

For his part, Beiser is denying the allegations.

In his own statement released earlier this week, he said: “There is no truth to these allegations. We believe they are politically motivated and we intend to vigorously defend ourselves.”