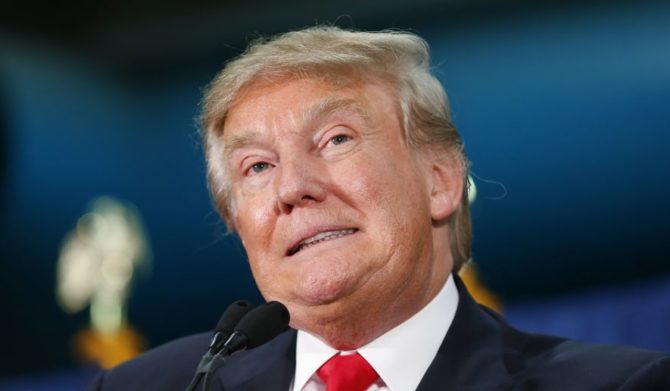 Donald Trump sat down with Julie Pace from the AP to talk about his first 100 days in office and it was as freewheeling and incoherent as you might expect.

“The one thing I’ve learned to do that I never thought I had the ability to do” Trump said when asked about the challenges of the job, “I don’t watch CNN anymore.”

Throughout the interview, Trump spewed all sorts of false assertions about his leadership skills, pushed untrue narratives about his popularity and success, and once again made it explicitly clear that he doesn’t really know what the hell he’s even talking about.

Well, the one thing I would say–and I say this to people–I never realized how big it was. Everything’s so (unintelligible) like, you know, the orders are so massive. I was talking to–Number one, there’s great responsibility. When it came time to, as an example, send out the 59 missiles, the Tomahawks in Syria, I’m saying to myself, “You know, this is more than just like, 79 (sic) missiles. This is death that’s involved,” because people could have been killed!

On the media, in general:

The opponents are talking $25 billion for the wall. It’s not going to cost anywhere near that! I think $10 billion or less. And if I do a super-duper, higher, better, better security, everything else, maybe it goes a little bit more. But it’s not going to be anywhere near (those) kind of numbers. And they’re using those numbers; they’re using the high numbers to make it sound impalatable (sic).

On his speech to Congress:

A lot of the people have said that, some people said, it was the single best speech ever made in that chamber.

On the media, again:

On his high TV ratings:

On how “big” everything is:

The financial cost of everything is so massive, every agency. This is thousands of times bigger, the United States, than the biggest company in the world. … It’s massive! And every agency is, like, bigger than any company. So, you know, I really just see the bigness of it all.

On why being president requires “love”: