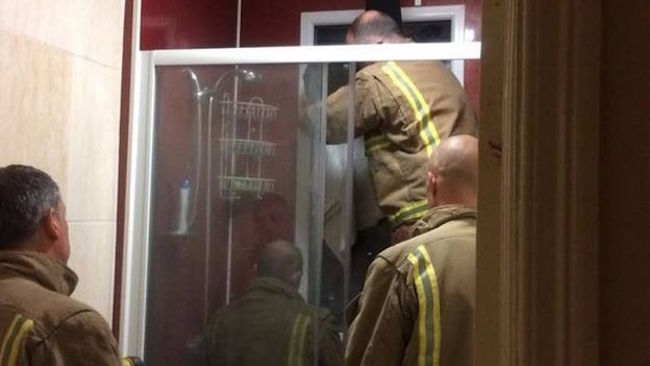 Modern dating can be a frustrating and humiliating process, and individual mileage may vary. Some outliers will even experience waking nightmares that are partly of their own making, such as the following story, which we’ll hesitantly, reluctantly share with you now.

So. How to put this gently? The BBC (of all places) dutifully reports that a young woman threw her own poo out her date’s bathroom window because the toilet “would not flush.”

And then? She later tried retrieving that poo and wound up getting wedged between two non-opening windows (despite the fact that she’s an amateur gymnast).

How is this gay news, you ask? Well, this is a universal concern that could potentially impact anyone at anytime, and it’s better that we as a species be informed regardless of our particular sexual proclivities.

Like the proverbial cat trapped in a tree, the young lady eventually had to be rescued by gallant firemen.

The woman in question, who will remain anonymous, claims she “panicked” before throwing her feces out the window.

Liam Smith, the man who happened to be on this doomed date, shared his story on a crowdfunding page to raise funds to fix the broken window.

He claims they were on a Tinder date, and decided to go back to his house.

“We’d had a really nice evening,” he says.

“We’d had a meal at a well-known chicken restaurant, had a few beers and then gone back to mine for a bottle of wine and a film.”

After his date went to the toilet, she later returned with a “panicked look in her eye” and told him what had gone down.

Apparently, that bathroom window opened into a narrow gap, itself separated by a second glazed window.

“It was into this twilight zone that my date had thrown her poo,” he says.

“I was starting to grow concerned, so I called the fire brigade and once they had composed themselves, they set to work removing her from the window.”

The woman in question was rescued unhurt, but the bathroom window was wrecked.

“Problem is, I’ve been quoted north of £300 to replace the window and as a postgraduate student, that is a significant chunk of my monthly budget.”

He and his date will donate the remaining money to two charities, one supporting firefighters and one that maintains flushing toilets in third-world countries.

So will there be a second date?

“Who knows what the future holds?” he says.

“We had a lovely night on the second date but it’s too early to say if she’s the one. But we got on very very well and she’s a lovely girl.

And we’ve already got the most difficult stuff out of the way first.”

Has anything half this awkward ever happened to you on a date? Is so, please tell your tale of woe in the comments below.