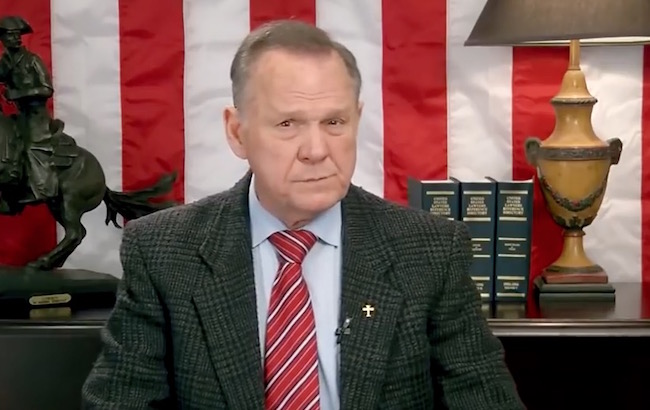 “In this race, we have not received the final count to include military and provisional ballots,” he said.

“This has been a very close race and we are awaiting certification by the Secretary of State….

This election was tainted by over $50 million dollars from outside groups who want to retain power and their corrupt ideology. No longer is this about Republican or Democratic control. It has truly been said that there is not a dime’s worth of difference between them. It is about a Washington establishment which will not listen to the cries of its citizenry — and the battle rages on.”

“We are indeed in a struggle to preserve our republic, our civilization and our religion and to set free a suffering humanity,” said Moore.

“Today, we no longer recognize the universal truth that God is the author of our life and liberty. Abortion, sodomy and materialism have taken the place of life, liberty and the pursuit of happiness.”

Speaking to TODAY on Thursday, Democrat Doug Jones, the winner of the race, claimed, “It’s time to move on.”

“I mean this is – every race is tough. It’s bitter sometimes. I think this one was one that people of Alabama have now spoken a little bit, and they decided to heal. Our campaign has been about that. It’s been about trying to find common ground and heal. And I think he would do well to just go ahead, let’s get this behind us, so the people of Alabama can get someone in there and start working for them.”