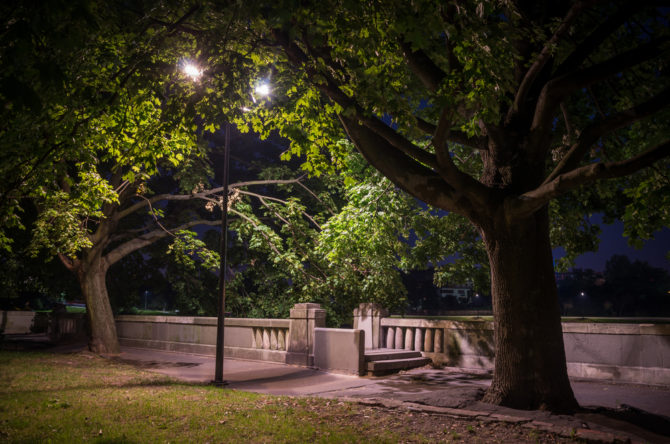 Tenants lucky enough to have landed condos in a million-dollar New York building have quickly discovered the space comes with a secret perk: namely, a panoramic view of Harlem’s Marcus Garvey Park, and the various randy escapades taking place in the bushes at all hours of the day.

DNAinfo reports tenants like Marie Gelot often go to the window to enjoy “the sweeping views of the Birch, Maple and Sweetgum trees,” only to get an eyeful of some of Mother Nature’s more scurrilous manifestations.

Since the view is so all-encompassing, cops regularly use the building for sting operations, seeking out all manner of public sexy-times. The 25th Precinct has already made eight arrests for “patronizing prostitution” and seven “public lewdness” arrests this year.

Because they’re professional reporters, DNAinfo paid a visit to the park on a recent evening. This is what they saw: dogs frolicking, kids playing flag football, elderly folks playing chess, and one man giving his friend head.

“This is ridiculous,” says Joseph Manley, who lives near the park on 123rd street. “I tell them to take that shit somewhere else because there are children in the park. The kids see it, the tourists see it, some of them take pictures sometimes.”

Queerty will update this story as more information becomes available… probably around 10pm or so.