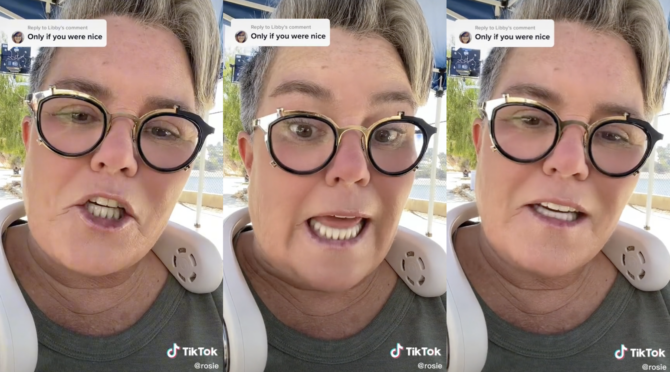 Rosie O’Donnell had the best response to a TikTok user who accused her of being mean to Donald Trump this week.

It all started last month when Rosie said she “couldn’t be happier” about the FBI’s search of the one-term, twice-impeached ex-president’s Florida compound on August 8.

A TikTok user by the name of Libby recently saw the video and commented: “Only if you were nice.”

Rosie took it upon herself this week to respond by singing her very own rendition of the old Libby’s canned food jingle, before declaring: “I’m nice to you. I’m just not nice to Donald Trump, because he’s a traitor. That’s why.”

In response, another TikTok user wrote: “Trump is the best president ever! So sad you liberals are so blind and brainwashed. I’m still waiting for you to move to Canada.” To which Rosie wrote back by telling them to “go away.”

And when another person wrote, “You’re entitled to your opinion but that doesn’t mean it’s right,” she replied that “facts say [it’s] right—wake up.”

FBI agents recovered a total of 33 boxes containing more than 100 highly classified documents stashed in the ex-president’s home office when they searched Mar-a-Lago.

The beef between Rosie and Trump is well-documented and goes way back to her days as a co-host on The View.

The 60-year-old funny lady has long considered the ex-president one of her biggest enemies and, just last month, said anyone who still supports him is “willfully blind.”