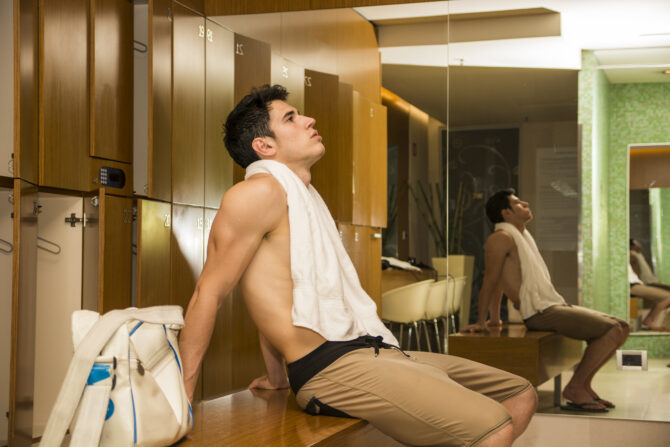 I spent Thanksgiving break with my friend’s family in Florida. During the trip, we spent a lot of time by the pool at the country club his family belongs to. The trip was super nice and way better than if I had stayed back at my dorm that week. But a weird thing happened…

After swimming one day, we went into the locker room to shower and get dressed before dinner with his family. It was here that I happened to glance over at the wrong (or maybe right?) moment and see my friend’s dad stepping out of the shower completely naked.

Now, I never would have probably thought twice about his dad. Not only is he my friend’s DAD, but he’s also straight (I assume) and probably 30 years older than me. But seeing him naked, largely endowed, and in a locker room setting, I suddenly can’t get him out of my head.

The glistening wet skin, athletic body, broad chest, and salt and pepper hair have sent my locker room fantasies into overdrive. I now see him in a completely different light, and even find myself nervous around him. I feel a tremendous sense of guilt that I’m turned on by my friend’s dad because it just feels awkward and wrong.

I’m supposed to go on a ski trip with his family after the new year. I really want to join them but I don’t know if I should tell my friend about my attraction or try to completely repress these feelings. What should I do?

Lusting after a friend’s parent is a tale as old as time (remember the iconic Jennifer Coolidge as Stiffler’s mom?). Don’t beat yourself up for it. It’s normal that if you’ve only known someone in a certain way, and then suddenly see them in a brand-new setting or situation, it would prompt you to see that person completely differently.

In this example, you happened to see him naked in a setting that can be sexually arousing for a lot of gay man. It’s bound to trigger those chemical reactions in the amygdala, the area of the brain responsible for sexual attraction. Dr. Wlassoff writes in his article “Sex – Is It All In the Brain?” in 2015, “During sexual arousal, our bodies show the same signs as they would in a life-threatening emergency: muscle tension, increased heart rate, blood pressure, and respiration, perspiring, pupillary dilation, and tunnel vision.” This is a physical and chemical thing, and not something you can control, so cut yourself some slack.

As far as telling your friend, having sexual feelings, and acting on those sexual feelings, are two different things. So, unless there’s more to this story, and you caught your friend’s dad looking back at you, and you want to pursue it, I don’t see the need in telling your friend. There’s no boundary crossing in a fantasy, and no crime in attraction. If, however, you think it could be a funny story between the two of you, and it wouldn’t cause any problems in your friendship, then I say go for it. But should you tell him? Nah.

Now, as far as “repressing” your feelings, it seems to me like you might feel some sense of guilt or shame about your attraction. I encourage you to try to release that by reminding yourself sexual attraction is a natural process and you aren’t actually acting on anything here.

Did you choose to find your friend’s dad attractive or see him getting out of the shower right when he did? No. Just as you didn’t choose to be gay and have the feelings you have.

Repression is a Freudian term defined as, “the unconscious blocking of unpleasant emotions, impulses, memories, and thoughts from your conscious mind.” Some people argue that repression plays a role in distorting an individual’s reality, which can lead to neurosis and dysfunction.

To put it more simply, I believe it’s important for all of our feelings to be felt, expressed, and processed, so I encourage you to talk to a therapist about your attraction so you can work through the feelings, and release shame. If you aren’t ready for therapy, think about being part of an online community that supports and shares these feelings. At the very least, joke with a friend about it. You certainly aren’t the first daddy lover out there, even if that daddy happens to call your friend his son.

Jake Myers the Founder of LGBTQ Therapy Space , the first LGBTQ owned and operated national platform for teletherapy. He has a Masters in Clinical Psychology from Antioch University Los Angeles, with a specialization in LGBT Affirmative Psychotherapy, and is a Licensed Marriage & Family Therapist in both California and Florida.

You can also email Jake at [email protected]