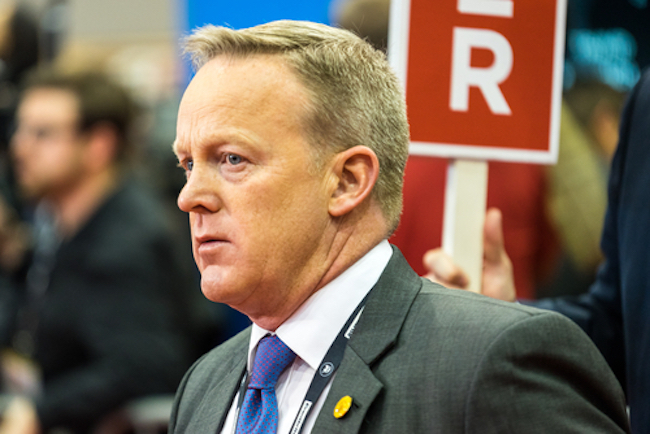 If it were a detail in a satirical novel, you’d criticize the author’s overly broad brushstrokes and say it’s the stuff of first drafts.

Page Six reports producers are courting Sean Spicer for the next installment of “Dancing with the Stars” while Trump’s former press secretary tries to figure out next steps — which sadly don’t appear to involve a long, languid waltz out of public consciousness forever.

Spicer was in New York City this week, gabbing with producers about a potential career in television, where he could visit talk shows and share inside info on all things Trump.

On the heels of his resignation Friday, sources saw Spicer heading out of meetings with high-level execs at NBC, ABC, CBS, and Fox News.

One source told Page Six news execs “made the full-court press” as they tried winning favor with Spicer while others merely “kicked the tires”.

Actor Zach Braff may be eating his words after tweeting “Can’t wait to see Sean Spicer waltz on Dancing with the Stars,” because according to the source, that idea “has legs.”

If Spicer does land on the show, it’s sure to echo former Texas Gov. Rick Perry‘s stint on the show, which wasn’t remotely cute and found him booted off after only two episodes.

Page Six contacted Spicer by phone on Wednesday, and he said, “I have no comment.”

An ABC rep told them, “We don’t comment on casting.”

Does that sound like a definite “Yes” to anyone else?