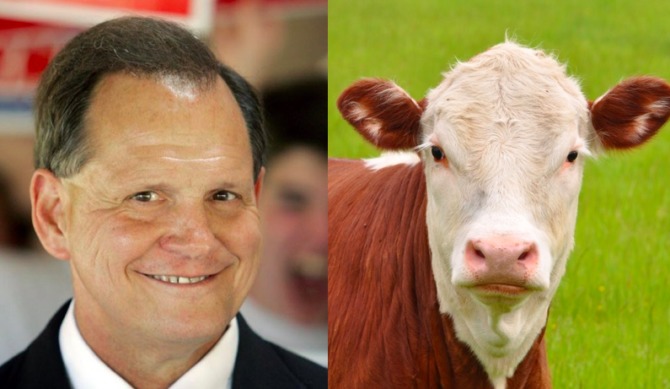 CNN has just unearthed a 2005 interview featuring Roy Moore, the conservative front-runner in the race to fill Jeff Sessions’ senate seat in Alabama, and it’s pretty damning. But will it make a difference in the upcoming election?

“Homosexual conduct should be illegal, yes,” Moore is heard telling Bill Press on C-SPAN2’s After Words while promoting his book So Help Me God.

The disgraced Alabama Supreme Court chief justice, who, in 2015, was removed from his post for refusing to honor the SCOTUS ruling on marriage equality, was talking about Lawrence v. Texas, the 2003 landmark SCOTUS decision where the court ruled state laws banning sodomy were unconstitutional.

Related: GOP Senate hopeful Roy Moore isn’t sure whether gays should be put to death

“Just because it’s done behind closed doors, it can still be prohibited by state law,” he argued. Then he asked Press, “Do you know that bestiality, the relationship between man and beast, is prohibited in every state?”

“Did I ask you about having sex with a cow?” Press replied, to which Moore said the two things were “the same thing.”

“No, it’s not,” Press, incredulous, fired back. “You mean homosexuality is the same thing as bestiality?”

“It is a moral precept upon which this country was founded,” Moore responded.

When asked about the newly unearthed tape, a spokesperson for Moore’s campaign declined to comment or respond to CNN’s inquiry about the candidate’s current position on homosexuality.

Considering just a few months ago, in February 2017, he appeared, for the fifth time, on Kevin “Kill the gays” Swanson’s extremist radio show to talk about the evils of homosexuality, we’d say it probably hasn’t evolved too much.