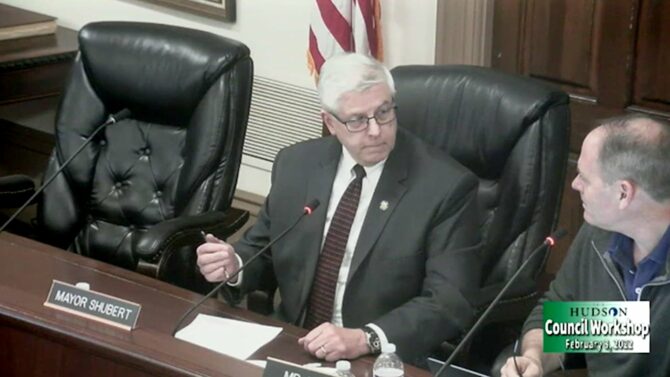 Craig Shubert is probably not a politician on most people’s radar. But the Republican mayor of Hudson, Ohio (pop.  22,262) is making national headlines after he linked ice fishing to prostitution at a city council meeting earlier this week.

During a discussion about ice fishing safety on Tuesday, Shubert expressed grave concern that the popular winter sport could create a slippery slope that ultimately leads to a flurry of sex workers descending upon the affluent enclave located just outside the big bad city of Cleveland.

“If you open this up to ice fishing, which while on the surface, it sounds good, then what happens next year?” Shubert asked. “Does somebody come back and say, ‘I want an ice shanty in Hudson Springs Park for X amount of time?'”

He continued, “And if you then allow ice fishing with shanties, then that leads to another problem: prostitution. And now you have the police chief of the police department involved. Just some data points to consider.”

But this isn’t the first time Shubert has embarrassed himself in public by making weird comments about sex. Last year, he was widely ridiculed after arguing that creative writing classes in public schools could lead to kids writing erotica or, worse, pornography.

“It has come to my attention that your educators are distributing essentially what is child pornography in the classroom,” Shubert said at a September 2021 school board meeting before demanding everyone on the board resign or risk being charged with a crime.

“I’m going to give you a simple choice: You either choose to resign or you will be charged.” pic.twitter.com/guhp0zc0ns

This also isn’t the first time the entire city of Hudson, Ohio has embarrassed itself. As it turns out, the place is a bastion of homophobia, hate, and self-righteousness.

And in January Hudson joined the ignoble list of cities across this great nation in which parents lobby local school boards to ban certain books, in this case, “A Girl on the Shore” by Inio Asano, “Lawn Boy” by Jonathan Evison and “Gender Queer” by Maia Kobabe.

Since becoming a national laughingstock over the whole ice fishing/prostitution thing, Shubert has issued a statement doubling down on his stance. Here’s what he said:

My comment about ice fishing, the permitting of shanties on lakes, and prostitution stems from my experience as a former television news reporter covering law enforcement agencies, which have made arrests for acts of prostitution in ice fishing shanties. When discussing proposed legislation, it is wise to discuss the potential for unintended consequences. My statement was to enlighten council that the future permitting of ice shanties may lead to other issues.