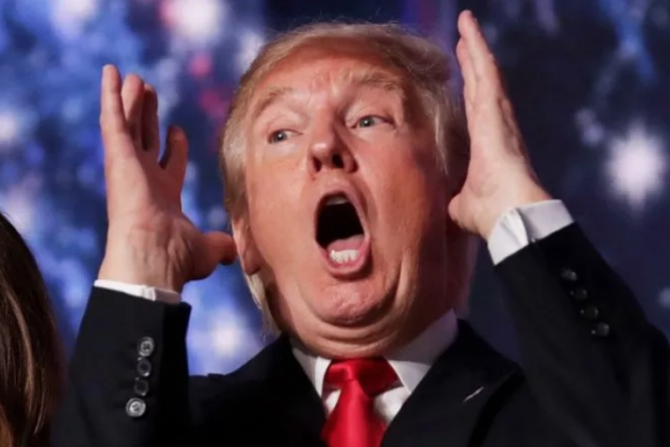 Each day we wake up and thank God we’re not Donald Trump. Today was no exception.

Over the weekend, Mary Trump said her uncle was likely “terrified” by the January 6 hearings, telling MSNBC’s Katie Phang, “The amount of evidence that we see coming out of these committee hearings is overwhelming.” And his behavior this morning certainly seemed to suggest he’s on the verge of a nervous breakdown.

Trump spent the greater part of the morning railing against the January 6 committee ahead of this afternoon’s hearing, which is expected to focus on his close ties to far-right extremists and militia groups.

Related: Mary Trump says for the “first time in his entire life” her crazy uncle Donald is truly “terrified”

In a string of unhinged Truth Social posts, the ex-president reiterated his false claims that the 2020 presidential election was stolen, accused the committee of being “Political Hacks and Thugs”, and said it was “formed solely for the purpose of bringing down my ‘numbers,’ or worse.”

“Isn’t it INCREDIBLE that the people who Cheated, Rigged, and Stole the 2020 Presidential Election, for which there is massive and incontestable evidence and proof… are totally protected from harm,” he raged. “And the people that caught them cheating are being investigated. Someday soon this will change, or we won’t have a Country anymore!”

On top of freaking out about today’s hearing, Trump had to abruptly cancel a paid rally in North Carolina this week after he, Don Jr., and Ivanka were ordered to testify under oath as part of that pesky ongoing investigation led by the New York State attorney general’s office.

AG Letitia James is said to be in the final phase of her inquiry into the Trump Organization’s potentially criminal business practices. Despite repeated efforts by Trump’s lawyers to dodge questioning, the trio of Trumps have been summoned to testify this Friday.

Unfortunately, that’s the same day Trump was supposed to appear in North Carolina for his “American Freedom Tour.” The event was first advertised back in May, with tickets ranging from $9 to $3,955 a pop.

Currently, the only other tour stop is scheduled for August 20 in Milwaukee, Wisconsin.

But the bad news doesn’t stop there.

To add a little insult to all that injury, a recent New York Times/Siena College poll found that support for the ex-president within the Republican Party is way, way down, with nearly half the party’s primary voters saying they want someone different for president in 2024 and a significant number vowing to abandon him entirely if he wins the nomination.

64% of GOP primary voters under the age of 35,  as well as 65 percent of those with at least a college degree, said they would vote against Trump in a presidential primary. When asked about January 6, nearly one in five said the ex-president “went so far that he threatened American democracy.”

So, that’s a ton of bad news. And it’s only Tuesday. We wonder what the rest of the week will bring for the Angry Orange Giant.