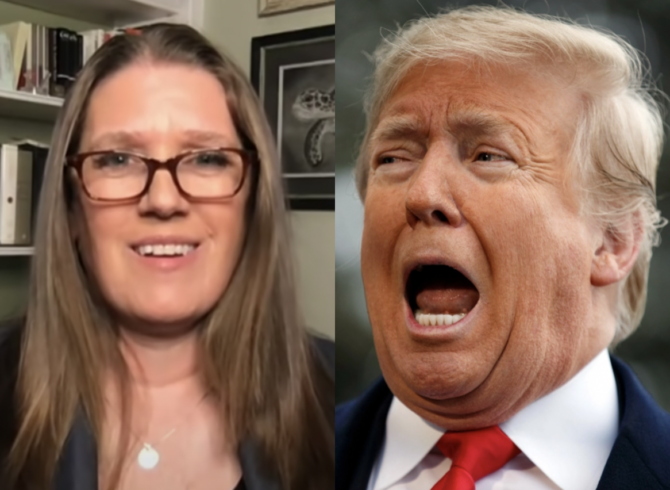 Mary Trump appeared on MSNBC over the weekend to offer her latest hot take on the January 6 hearings and why she’s fairly confident her crazy uncle Donald is “terrified” right now.

“To say that Donald is terrified is accurate and also an understatement,” Mary said on MSNBC’s The Katie Phang Show over the weekend.

“I think this might be the first time in his entire life that even he can’t deny the walls may indeed be closing in. The amount of evidence that we see coming out of these committee hearings is overwhelming.”

Mary added that the witnesses who have begun coming out of the woodwork to speak with the committee are increasingly important in terms of the access they had to Trump in the days leading up to and immediately following January 6, most notably former White House counsel Pat Cipollone, who met with the panel for over eight hours on Friday.

Cipollone’s testimony will be presented to the public in upcoming hearings, which resume tomorrow. Specific details about what he told the committee have been kept under wraps, but Rep. Zoe Lofgren said Cipollone “did not contradict” the testimony of previous witnesses.

That certainly sounds ominous for the ex-president.

Related: Mary Trump just made a dire prediction about the growing rift between Donald and Ivanka

“It would be almost unimaginable at this point if he got out of all of the legal and civil charges against him,” Mary said.

“But again, you know, you said it, for decades now he has always skated, and that’s the only reason I’m not confident. Hopeful, but not entirely confident there will be consequences.”

Speaking to CNN, a House select committee spokesperson described the interview with Cipollone as “productive”, adding that “the Committee received critical testimony on nearly every major topic in its investigation, reinforcing key points regarding Donald Trump‘s misconduct and providing highly relevant new information that will play a central role in its upcoming hearings.”

The interview [with Cipollone] was recorded on video and could be featured at upcoming hearings, including one on Tuesday that will focus on how the violent mob came together and the role of extremist groups, as well as another hearing — which hasn’t yet been scheduled — on the 187 minutes of Trump’s inaction as rioters stormed the US Capitol.

Trump responded to Cipollone’s cooperation with the Committee in an angry statement on Truth Social, writing: “Why would a future President of the United States want to have candid and important conversations with his White House Counsel if he thought there was even a small chance that this person, essentially acting as a ‘lawyer’ for the Country, may someday be brought before a partisan and openly hostile Committee in Congress.”

It looks like Pat Cipollone threw Trump under the bus. Good.

She’s rarely wrong- and, yes, her uncle was used as a rubber stamp for bad laws, and behavior.

I *love* how Mary calls him “Donald”. Never gets old

Jan. 6 Committee on Pat Cipollone’s 8.5 hour interview: “In our interview with Mr. Cipollone, the Committee received critical testimony on nearly every major topic in its investigation … This includes information demonstrating Donald Trump’s supreme dereliction of duty.”

I absolutely love the idea of a scared DT. 😄

Mary Trump, the best Trump on the planet.
🎯

Trump announced today that he is thinking about going to Japan’s Abe’s funeral. Hmmm, an escape plan from US prosecution in the works?

Mary Trump explains why her uncle is so worried about what Pat Cipollone told the 1/6 Committee, “Donald also knows that Pat Cipollone, at this point, has absolutely no reason to lie or to take a bullet for Donald by covering for him.” pic.twitter.com/5GRHR1DDPX

The January 6 Committee will reconvene tomorrow afternoon. The hearing is scheduled for 1 p.m. on Capitol Hill. All major networks plan to carry it. It can also be viewed live on the Committee’s YouTube channel at youtube.com/c/January6thCmte.