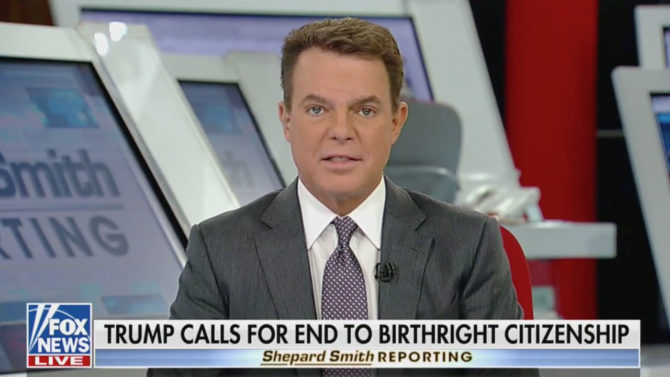 Shepard Smith has done it again. Yesterday, he defied Donald Trump and Fox News by fact-checking yet another false claim made by the president. That makes two days in a row now!

On Monday, Smith pushed back against Trump’s claims that a “migrant caravan” was coming to “invade” America. On Tuesday, he fact-checked remarks Trump made about using an executive order to end birthright citizenship.

“It was always told to me that you needed a constitutional amendment. Guess what? You don’t!” Trump said in a recent interview with Axios. “I can do it just with an executive order.”

Birthright citizenship is a part of the Citizenship Clause of the Fourteenth Amendment to the United States Constitution written in 1868 that states:

Smith also pushed back on Trump’s claim that the United States is “the only country in the world where a person comes in and has a baby, and the baby is essentially a citizen of the United States … with all of those benefits.”

Related: Trump’s gonna be pissed when he hears what Shepard Smith just said about him on live TV

“We’re not the only country in the world,” Smith corrected. “There are 30 of them, including Canada next door.”

He added: “Further, constitutional scholars say in the event the president actually tries this move, there would be an immediate injunction and his order would not ever take effect.”

Then he laughed the whole thing off, calling it “just talk.”

Naturally, Fox News viewers weren’t too pleased with Smith’s truth-telling, and many took to Twitter to express their outrage:

Who is this @ShepNewsTeam AKA Shepard Smith? Why is he still allowed to be on @FoxNews? He should be on one of those #FakeNews networks.#ShepardSmith is BAD for #FoxNews!

@ShepNewsTeam You’re cynical reporting today on Trump and the birthright citizenship debate was palpable… You are not supposed to be cynical you are supposed to report the news without your opinion flowing out to viewers… Read what Michael Anton has to say about it.

Why does FOX keep this creep on the payroll?
He'd be popular at #CNN or #MSNBC!

"There is no invasion. No one is coming to get you."
~Shepard Smith#FoxNews fire #ShepardSmith pic.twitter.com/QP2SqnNpUy

@FoxNews I would just like to ask #FoxNews WHY they are allowing an anti-American, Trump Hating person like #ShepardSmith to still have his own show on Fox??? EVERY TIME I hear him speak, I feel like I am listening to #FakeNews CNN!!!

What happened to Fair and Balanced @FoxNews? If @ShepNewsTeam wants to give his opinion, fine; but please don’t call it news. There is a legitimate debate going on about birthright citizenship, which by his declarative statements, he wants to shut down.

However, I was SHOCKED to learn he was chief NEWS ANCHOR! When did it become ok for reporters to editorialize?!

@ShepNewsTeam Shep is gleefully critical of Trump's desire to end anchor babies. "Trump is wrong. Trump lies" Well so does Shep. Only one other major country, Canada, allows birthright citizenship. Europe hasn't sine 2004. Shep, tell the whole truth…or get a job at CNN.