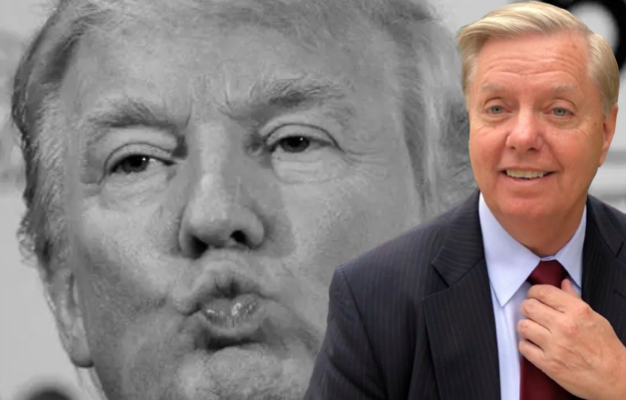 Lindsey Graham has sure been sucking up a lot to Donald Trump lately. It’s quite the turnaround from a few years ago, when he regularly referred to him as a “disgrace”, a “jackass”, and “one of the dumbest human beings” on the planet.

First, there was that shrill-f*ck-the-Democrats tirade Graham made during Brett Kavanaugh’s Supreme Court hearing last month, which resulted in memes like these:

Then there was the time he went after outspoken Trump critic Chelsea Handler for saying mean things about him.

“I don’t think much about what she says at all,” Graham said of the 43-year-old comedian. “Belittling people is not as funny as it used to be.”

Graham’s latest act of ass kissing comes by way of a series of tweets praising Trump for his stance on birthright citizenship.

Trump said in an interview with Axois released today that he plans on signing an executive order to end the practice of birthright citizenship, which automatically grants citizenship to any baby born within the jurisdiction of the United States.

The policy is a part of the Citizenship Clause of the Fourteenth Amendment to the United States Constitution written in 1868 that states:

“It was always told to me that you needed a constitutional amendment. Guess what? You don’t,” Trump said. “You can definitely do it with an act of Congress. But now they’re saying I can do it just with an executive order.”

He added, incorrectly: “We’re the only country in the world where a person comes in and has a baby, and the baby is essentially a citizen of the United States … with all of those benefits.”

Graham, who is rumored to have his eye on Jeff Sessions’ Attorney General seat once Sessions is fired after the mid-terms, wasted no time applauding Trump, saying he 100% supports the elimination of birthright citizenship. In fact, he was planning on introducing similar legislation himself!

This morning, Graham fired off this series of tweets:

Finally, a president willing to take on this absurd policy of birthright citizenship. https://t.co/kCa0ko7P76

I’ve always supported comprehensive immigration reform – and at the same time – the elimination of birthright citizenship.

The United States is one of two developed countries in the world who grant citizenship based on location of birth.

This policy is a magnet for illegal immigration, out of the mainstream of the developed world, and needs to come to an end.

In addition, I plan to introduce legislation along the same lines as the proposed executive order from President @realDonaldTrump.

Meanwhile, the vast majority of legal experts, as well as many top Republicans, say ending birthright citizenship is ridiculous and unconstitutional. In fact, many aren’t even entertaining the idea.

“Well, you obviously cannot do that,” House Speaker Paul Ryan said during a radio interview today. “You cannot end birthright citizenship with an executive order.”

Honestly, the only person who seems on board with it is Lindsey Graham. Which leads us to wonder if he’s intentionally trying to commit career suicide. Surely, he knows by now that literally every single person who gets in bed with Donald Trump–from Paul Manafort to Roseanne Barr, Michael Flynn to Kanye West–ends up going down in flames.