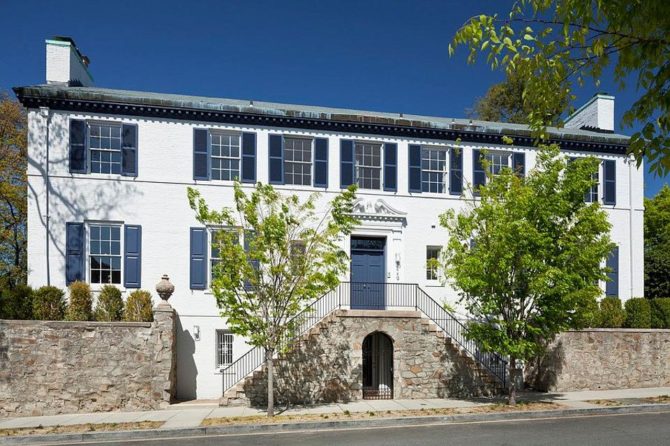 Ivanka Trump‘s new neighbors say she has completely “ruined” their friendly, quaint D.C. neighborhood. And they’re not happy about it.

“It has been a three-ring circus from the day that they’ve moved in,” Marietta Robinson, who lives across the street from Ivanka and Jared’s $5.5 million compound, tells the AP. “They’ve completely ruined the neighborhood!”

In addition to the general sense of chaos the Trumps bring, one of the biggest complaints seems to be parking. Neighbors say it was already a problem before they came along, and it has only gotten worse over the past two months. They can no longer park in front of their own homes because the fleet of Secret Service vehicles is constantly blocking everything. And as for having guests over, forget it.

“Sometimes there are 10 cars out there,” Robinson says. “They’ve completely taken over the whole street–as if they have the authority!”

Of course, in typical Trump fashion, Ivanka and Jared installed four “No Parking” signs outside their house to ensure they always have a convenient place to park. Everyone else, however, can eat cake. Because when other neighbors tried doing the same thing outside their homes, the city had their signs promptly removed.

“I started screaming,” Rhona Friedman, who has the misfortune of living directly next door to the Trumps, tells the Washington Post.

Parking has become such an issue, Friedman says, that “if you happen to miss that moment before the spaces get filled, you’re dead.”

On top of that, metal barricades have been put up along the streets making it impossible for pedestrians to use the sidewalks, and members of the Secret Service are constantly trolling around the street 24-7, talking in loud voices, and even changing their shirts in public view.

“There are more of them than I have ever seen,” Robinson says. “Frequently several of them are milling outside of the house at all hours having conversations and staring meanly at anyone in view.”

To add insult to injury, Ivanka and Jared don’t follow the neighborhood’s trash schedule and just throw bags of trash on the curb whenever they want, sometimes leaving it sitting out there for days, stinking up the street.

“Are you kidding me?” Friedman gripes. “This is the adult child of the president.”

Robinson says the Trumps have “truly ruined my peaceful enjoyment of my house.”

“It is every bit as disruptive as if a very active business was allowed to come into this residential neighborhood,” she says.

When asked for comment about the issue, an aide for Ivanka told the AP everything is hunky dory, relaying a message from Ivanka that said, “We love the neighborhood and our family has received an incredibly gracious welcome from our neighbors.”