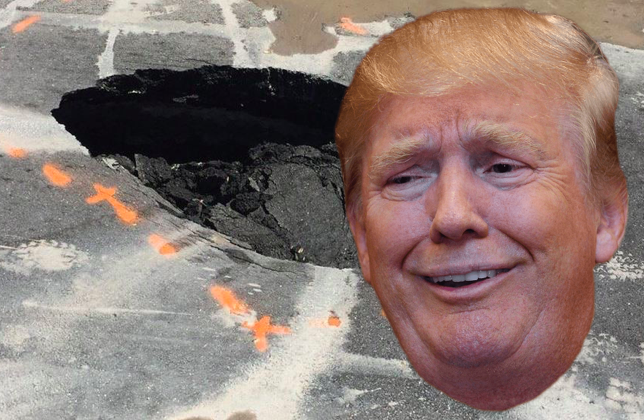 Get this: On Earth Day, Twitter user @PissedEgg posted:

@dumptrump33 @realDonaldTrump I hope the Earth opens up a giant sinkhole under Mar-a-Lago ???#EarthDay

This morning, the town of Palm Beach reported that a 4′ x 4′ sinkhole has opened up directly in front of Donald Trump‘s lavish beachfront resort. Utility crews are currently doing an exploratory excavation to determine the cause of the hole.

As soon as the news broke, the Internet was flooded with metaphors for what the sinkhole might mean.

Check out some of the theories…

"Give us a sign, God."
[sinkhole appears in front of Mar-A-Lago]
"Hm, can't be sure that's anything."https://t.co/oTrfQkYBxR

Sinkhole Opens Next to Mar-a-Lago in Obvious Sign From Increasingly Irritated God https://t.co/5cg6lAK2vt

Trump starts fucking with mystical orbs and the next day a sinkhole opens in front of Mar-a-Lago. He has no idea what he's unleashed.

Can we get a time stamp on this and the sinkhole opening at Mar-a-lago? pic.twitter.com/n57zX2Ino7

A sinkhole opened up in Mar-a-Lago which means even Florida is trying to get rid of Trump.

@EVNawesome @marciebp @washingtonpost Roger Ailes dies and Mar A Lago has a sink hole opening up in front. Signs, miracles and wonders? Down they all go… #SinkHole

My working theory: It’s a hellmouth, not a sinkhole.

@townpalmbeach @Fahrenthold But it is a beautiful sinkhole. The best sink hole in history. A model sinkhole for all future sinkholes.

oh no she didn't
33 comments