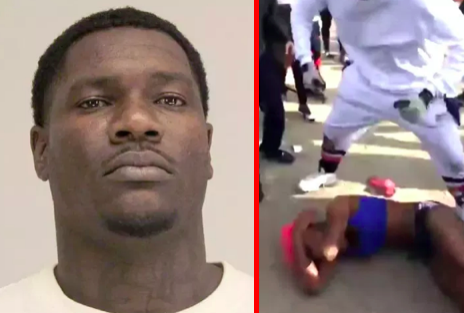 A Dallas man caught on tape violently attacking a transgender woman over a traffic altercation was offered $200 to beat her up, according to a police affidavit.

The video, which quickly went viral, shows Edward Dominic Thomas beating Booker to the ground while a crowd gathers around to watch.

According to the Dallas Morning News, Booker told police it all started when she accidentally backed into another car in the parking lot of an apartment complex.

The driver of the other vehicle, who is named as a suspect in Thomas’ arrest warrant affidavit but has not been arrested, said he ran the victim off the road to keep her from fleeing. The victim … told police the other driver pointed a gun at her and refused to let her leave unless she paid for the damage. As a crowd gathered, someone offered Thomas $200 to beat Booker, the affidavit said.”

As a result of the attack Booker suffered a concussion, fractured wrist, and bruising. She also says homophobic slurs were shouted at her during the attack.

Dallas police are now investigating to see if it meets the criteria of a hate crime.

Thomas has been arrested and is in jail with bail set at $75,000. Another suspect who allegedly kicked Booker in the face has not yet been arrested.

Watch the disturbing video below. Or don’t.