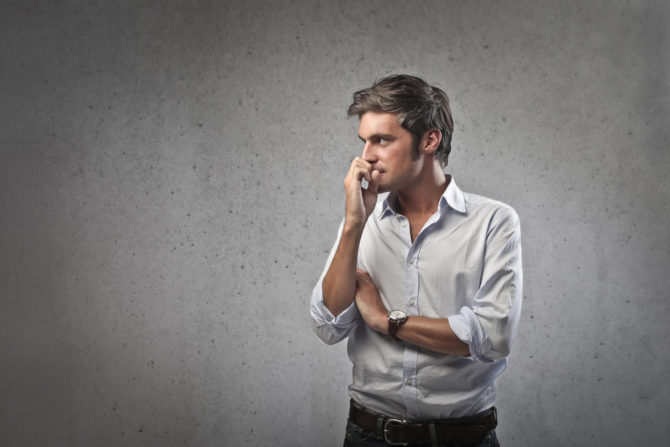 It’s estimated that 3.3 million people (2.3% of Americans) suffer from OCD. But did you know the disorder comes in many different forms?

Homosexual Obsessive Compulsive Disorder, or HODC, is defined as the fear of being or becoming homosexual when a person is, in fact, heterosexual.

“I didn’t fancy men,” 26-year-old Darren tells Esquire. “I had a girlfriend, and only ever had sexual feelings for women, but I just couldn’t shake the idea that I was somehow lying to myself.”

And this wasn’t just another case of a straight dude getting his rocks off to gay stuff on the internet, which happens all the time. Darren explains he doesn’t watch the videos for any sort of sexual gratification. He just watches them to watch them. Because he can’t not. Because he’s literally obsessed.

“I just woke up one day and I was suddenly obsessed with it,” he recalls. “It felt like everything I thought I knew about myself was falling apart. It didn’t make any sense.”

Related: Her boyfriend is obsessed with male anatomy and watching gay videos, but he insists he’s straight

Aaron Harvey also identifies as straight and suffered from HOCD for many years. After getting control of his obsession, he founded the non-profit OCD awareness project intrusivethoughts.org.

“Sufferers will spend hours per day ‘checking’ or ‘testing’ themselves to try to get to the ‘truth’ about their sexual identity,” Aaron explains. “I would constantly check levels of arousal. Objectively assess my instinctive attraction towards females and my lack of interest in the male form.”

Eventually he became obsessed with his ex-girlfriend’s brother, convincing himself he was actually in love with the man, even though he wasn’t.

According to Aaron, some HOCD sufferers will go so far as to “plan coming out to family and friends, all the while not believing they are gay.”

In opposite-sex relationships, he adds, they may withdraw from their boyfriends or girlfriends both emotionally and physically out of fear that they don’t really know who they are.

“You become paranoid,” he says. “You may be selling a lie to the person you love the most.”

According Avy Joseph, an accredited Cognitive Behavioral Therapist and lecturer, HOCD isn’t officially recognized as a form of Obsessive Compulsive Disorder by the Diagnostic and Statistical Manual of Mental Disorders, though he says it definitely falls in line with typical OCD behavior.

He explains to Esquire:

The more you insist that you mustn’t have a particular thought, guess what happens? You’re going to have hundreds of them. That causes anxiety, and then you start to think more unrealistically. The ability to think in a probabilistic way goes out the window. Then you ask yourself: ‘How can I be absolutely sure that these thoughts won’t come back?’ And then of course you start demanding certainty…

The OCD Center of Los Angeles website states that HOCD doesn’t just happen to heterosexuals. There are plenty of gay people who develop intrusive thoughts about heterosexuality:

Over the years, therapists here at OCD Center of Los Angeles have treated many homosexuals (male and female) who are plagued by obsessive fears of being “straight”, and who suffer equally when OCD attacks their sexual identity.  Furthermore, the fears that clients with this condition report have little to do with actually becoming gay (or straight).  At its core, Sexual Orientation OCD is the fear of not knowing for sure, paired with the fear of never being able to have a healthy, loving relationship with a partner to whom one feels genuinely attracted.

Related: Sexually frustrated straight guy considers going gay, but is he up to the task?

So what can be done about this debilitating disorder?

Aaron says getting an OCD diagnosis from a clinical psychologist is key.

He continues, “My anxiety can be fueled by a lot of stuff, but I just do the same thing I was taught to do with fears about sexuality. Accept it, let the thought pass, and move on.”