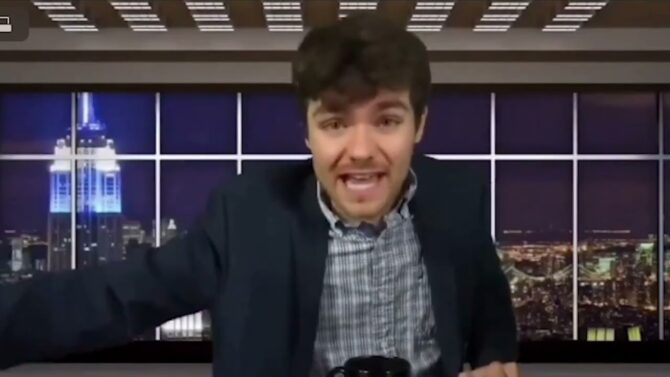 Extreme-right, white nationalist commentator Nick Fuentes has a laundry list of deplorable views. He’s questioned interracial marriages and whether the Holocaust took place, praised Jim Crow-era segregation laws, and said that he would prefer it if women were not allowed to vote. His latest hot take on human sexuality isn’t so much offensive as it is totally, utterly, batsh*t crazy.

Fuentes identifies as an involuntary celibate (incel), and employed some incredible mental gymnastics to defend his incel identity after admitting he’d kissed a girl in high school. Some followers made the case that Fuentes’ former romantic success actually makes him voluntarily celibate, and we can’t believe anyone actually cares about the distinction.

The anti-LGBTQ personality also apparently thought his sexual orientation was being called into question, leading to this breathtaking argument that all sexual activity is “gay.”

In a recent episode of his show, America First, Fuentes said:

“Gay people do date girls all the time. All these gay people are coming out and saying, ‘I’ve had more girlfriends than Nick. I’ve had sex with more girls than Nick.’

“That actually makes me really more heterosexual than anyone.”

“The only really straight heterosexual position is to be an asexual incel. That’s it. That’s all there is.”

“Having sex in itself is gay, I think. I think that it’s really a gay act. Think about it this way: What’s gayer than being like ‘I need cuddles. I need kisses … I need to spend time with a woman.’ That’s a little sus.

After the clip was posted to Reddit, comments mocking Fuentes started to pour in.