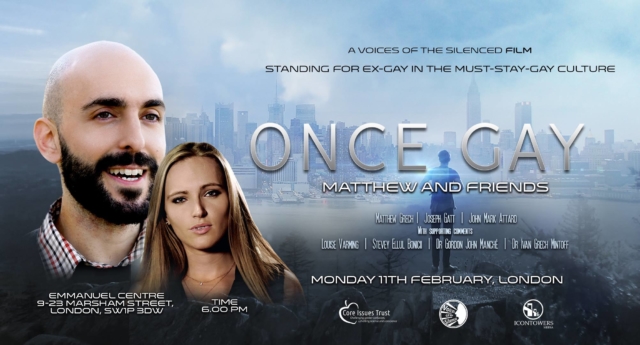 Eye-roll inducing news from London: an “ex-gay” admits he still has an attraction toward men.

The new documentary Once Gay premiered at the Emmanuel Evangelical Church in London February 11. The film follows the story of musician Matthew Grech, a singer noted for once appearing on a European version of The X Factor. Grech claims to have been “cured” of homosexuality through conversion therapy–the widely denounced practice of attempting to change sexual orientation, often through religious instruction. In the movie, Grech states that he no longer feels a same-sex attraction.

Following the premiere of the film, however, Grech admits he has not developed an attraction to women. When asked if he still had an attraction to men, the singer told UK site PinkNews “I do, yes… if I had to put it another way, I don’t think I have experienced a specific connection with a woman. For some people, success is if your sexual orientation literally changes, but for some people, success is literally controlling their own thoughts so they don’t go in a specific direction. Just because my flesh has not changed, does not mean I have not changed… I’m simply saying I have moved away from the homosexual lifestyle.” He added that he hopes God will one day make him attracted to women.

Grech claims to have received his not-so-curative cure from a group called Core Issues Trust, a group run by Mike Davidson. Davidson, who does not hold any certification in medicine or psychology, designed the program based on Evangelical Christian teachings and dismisses the dangers widely associated with conversion therapy. The group is also currently lobbying to overturn a ban on conversion therapy in Grech’s home nation of Malta.

Conversion therapy has become a much-discussed and derided practice in recent years. Virtually every major medical and psychological organization in the world has denounced the practice as reckless and notes that conversion therapy often leads to severe depression, self-harm and suicide. Last year, two well-reviewed films, The Miseducation of Cameron Post and Boy Erased portrayed true stories of LGBTQ people who underwent torturous practices in conversion therapy camps. Moreover, several real-life spokespeople for the ex-gay movement and longtime advocates of conversion therapy have denounced the practice. They include John Smid, former head of Love In Action, David Matheson of the Mormon group Journey into Manhood, and former journalist turned minister Michael Glatze.