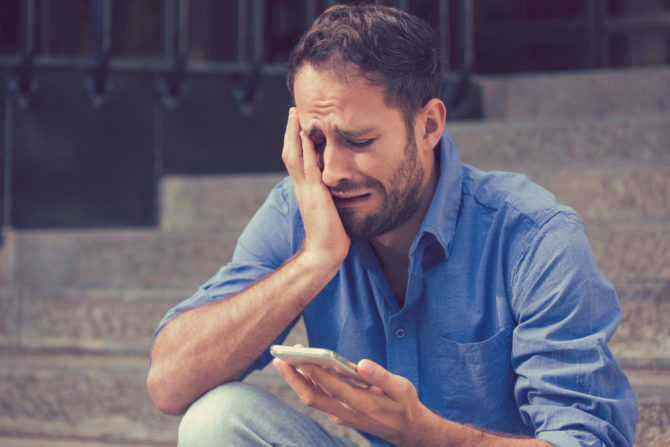 Dating got you down? It could the dating apps themselves, not actual dating, that’s depressing you.

According to a new study conducted by researchers at the University of North Texas, men who regularly use the dating app Tinder reported more body image issues and lower levels of self-esteem than guys who don’t use it at all.

Here’s what researchers found about men, specifically: Male Tinder users demonstrated higher levels of shame about their bodies, including feelings of inadequacy when it comes to their height, amount of body hair, shoe size, and–surprise, surprise–penis size.

They were also more likely to view their bodies as sexual objects rather than just, well, bodies. They also reported an increased level of body surveillance and increased pressure to maintain a specific physique. And they were more judgmental of other people’s physiques.

Related: Study Reveals The 50 Biggest Turns-Offs When It Comes To Dating

Our results suggest that Tinder represents a contemporary medium for appearance pressures, and its use is associated with a variety of negative perceptions about body and self and with increases in individuals’ likelihood to internalize appearance ideals and make comparisons to others.

In other words: Dating apps make people more shallow… Or maybe people who more shallow have a higher tendency to use dating apps. Which do you think it is?