An Italian tennis player has apologized after repeatedly calling himself a homophobic slur during his Olympic tennis match.

Fabio Fognini, 34, repeatedly shouted “frocio” at himself as he began losing points to his opponent, Russia’s, Daniil Medvedev, 25. It roughly translates as “faggot.”

The Russian, seeded number two, eventually beat Fognini 6-2, 3-6, 6-2 and now advances to the quarter-finals stage. After the final point, Fognini threw his racket into a courtside trash can. His use of the word “frocio” was picked up by several on social media.

The match lasted 2hours and 26 minutes and was played in great humidity. In fact, so exhausting was the heat that following two medical timeouts, and nearly fainting, Medvedev even took a shower between the second and third sets.

Fognini, currently ranked 31 in the world, blamed the weather conditions on his use of homophobic language. After the match, on his Instagram stories, he posted the following apology in Italian against a rainbow background.

“The heat went to my head. In today’s match I used a really stupid expression towards myself. Obviously, I didn’t want to offend anyone’s sensibilities. I love the LGBT community and I apologize for the nonsense that came out of me.” 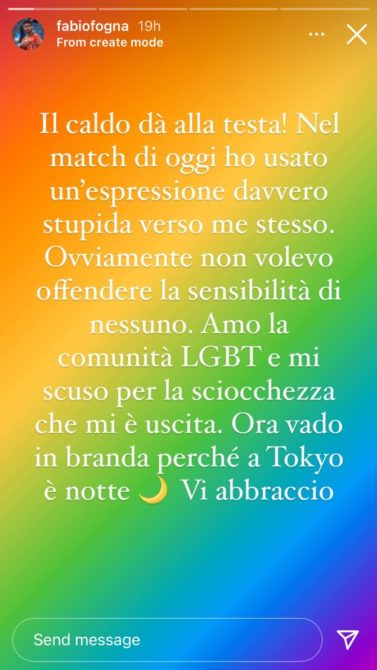 Fognini has a reputation for being hot-headed. He was thrown out of the US Open in 2017 for calling a female umpire “troia” and “bocchinara” – which translate as “whore” and “cocksucker”. That incident came as an angry Fognini lost his first-round singles match, and resulted in him losing his place in the event’s doubles tournament.