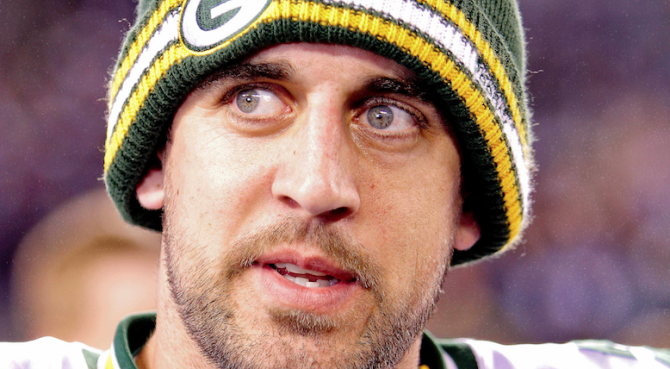 Aaron Rodgers is a fairly common name — WhitePages.com lists over 100 Aaron Rogers across the U.S. (we’d wager there are more than that), so to all the Aaron Rodgers out there having a fantastic week, keep it up.

But Green Bay Packers quarterback Aaron Rodgers is not among them.

On Friday, Rodgers confirmed he’s unvaccinated against Covid-19, has taken ivermectin and accused the “woke mob” of trying to “cancel” him. He’s apparently been bypassing NFL protocols for unvaccinated players, and kicked off his week by missing Sunday’s game because… he has Covid.

Saturday Night Live opened off its most recent episode with Pete Davidson playing Rogers and being interviewed by Jeanine Pirro (Cecily Strong). It gave us such lines as Rodgers asserting “It’s my body, my Covid,” and Strong starting a question with “And straight talk, Aaron — ’cause I never talk gay,” referencing those gay rumors Rodgers worked extra hard at dispelling in 2015.

At one point, Davidson jokes about Rodgers’ relationship with insurance company State Farm going south. And flipping the script, life appears to be imitating art.

Rodgers has been a State Farm pitchman since 2011, and while the company is staying as corporate-neutral is it can responding to Rodgers’ statements (they “don’t support some of the statements that he has made”, but “respect his right to have his own personal point of view”), televisions are telling a much different story.

The number of State Farm ads featuring Rodgers took a dramatic nosedive over the weekend, with the player only appearing in 1.5% of the roughly 400 spots the company aired on Sunday. That’s down from 25% the previous two Sundays, reports Apex Marketing, which tracks national ad buying.

“Our monitoring indicates that this wasn’t a planned reduction and more reactionary because there wasn’t any new significant ads put in its place,” said Apex president Eric Smallwood in a statement.

Adding to Rodgers’ troubles is news that Green Bay, Wisconsin-based Previa Health has ended their relationship for good. Rodgers had been a spokesperson for the company since 2012.

“Prevea Health remains deeply committed to protecting its patients, staff, providers and communities amidst the COVID-19 pandemic,” the company wrote in a statement. “This includes encouraging and helping all eligible populations to become vaccinated against COVID-19 to prevent the virus from further significantly impacting lives and livelihoods.”