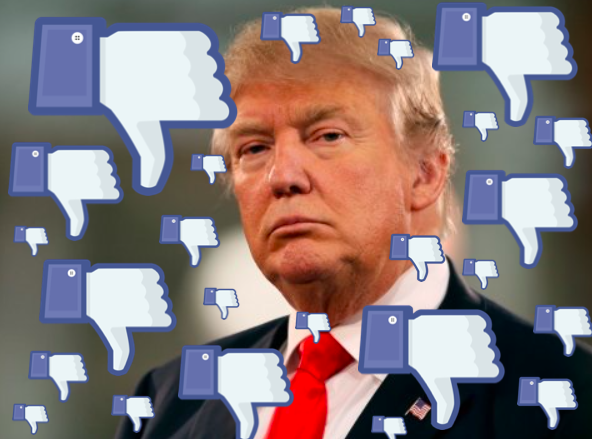 How much do people dislike Donald Trump? (Hint: A lot!)

A new Gallup poll released yesterday found that Donald’s approve ratings have sunk to a new low, not just for him, but in the 70+ year history of Gallup polling.

1,500 Americans were asked how they felt about the job Trump was doing. A paltry 37% say they approve of his job performance, compared to 58% who disapprove. That’s an eight-point drop from where he was nine days earlier, when his approval rating was hovering at 45%. Sad!

Even sadder, Barack Obama’s rating at this point in his presidency was 60%.

Related: Donald Trump claims to have the will of the people, but Facebook video tells a different story

Oh, but the bad news doesn’t stop there. Because Gallup says Trump’s approval rating is lower than any other president at this point in his first term since it first started tracking these numbers 72 years ago way back when Harry Truman was in office.

On top of that, a new GenForward poll found Trump is doing even worse among millennials. A pathetic 22% of people ages 18-3o say they approve of his job performance, 15 points lower than the Gallup poll. And 57% say they consider him an “illegitimate” leader.

To add insult to injury, he does even worse among African American and Latino millennials, who disapprove of his job performance at a rate of 71% and 72%, respectively.

Not only does this signal trouble for #45, but it’s not a great sign for Republicans, in general. It’s going to be very difficult for them to retain power for very much longer when the standard bearer of their party is doing so poorly among the next generation of voters and political leaders.

Trump is obviously angered about all these numbers. We know because he tweeted about them at 7:35 this morning, claiming it’s all a bunch of “fake news”:

Just heard Fake News CNN is doing polls again despite the fact that their election polls were a WAY OFF disaster. Much higher ratings at Fox