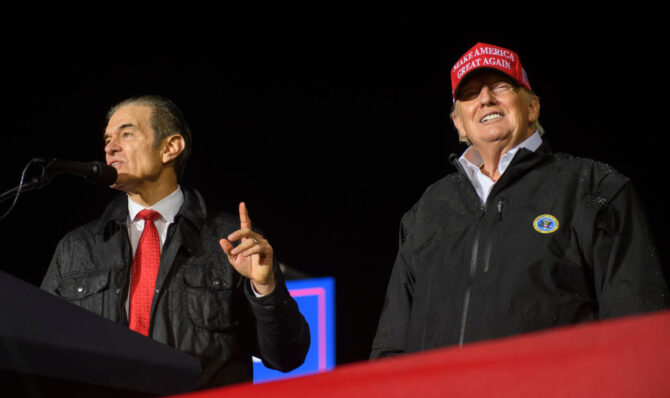 The TV doctor/U.S. Senate hopeful’s opponent, conservative commentator Kathy Barnette, has gone from virtual nobody to virtual front-runner in Pennsylvania’s GOP Senate race and the primary is just a few days away.

Prior to her sudden surge in the polls, Dr. Oz was narrowly leading in the crowded field after securing a controversial endorsement from Donald Trump. Now, it appears the endorsement might have hurt more than it helped, since almost immediately afterward, Barnette saw her numbers skyrocket.

Unfortunately, her rise in the polls is also very bad news for LGBTQ people.

In the past, Barnette has voiced support for a business owner who posted a “No Gays Allowed” sign in his front window, and declared that “homosexuals LEAD with their sexual preference” and should “leave [the] immorality in the bedroom.”

@WayneDupreeShow @smithkarl393 That’s the point. Many homosexuals LEAD with their sexual preference. Leave d immorality in their bedroom

This week, Barnette nabbed a major endorsement from the conservative group Club for Growth Action, which shelled out $2 million for pro-Barnette commercials to air in the final days of the campaign, as well as endorsements from anti-abortions organizations–the super PAC arm of Susan B. Anthony List and CatholicVote.

In response to all this, Trump issued a statement yesterday reiterating his support for Oz and trashing Barnette for having “many things in her past which have not been properly explained or vetted” and criticizing her for being unable to “win the General Election against the Radical Left Democrats.”

Many have interpreted the ex-president speaking out against Barnette as evidence that he views her as a serious threat who could undermine his credibility.

She was asking for prayers because she was seeing a homosexual. https://t.co/X9dXCD3GyT

In response to the “Crazy Kathy” video, Barnette tweeted a video pushing back against what she called “crazy allegations.”

“I have never supported Black Lives Matter,” she affirmed. “I have been very clear about who I am, and I’ve been this way for a very long time. When Donald Trump talked about the swamp, he wasn’t just talking about Democrats, OK?”

The GOP primary in Pennsylvania will happen next Tuesday.