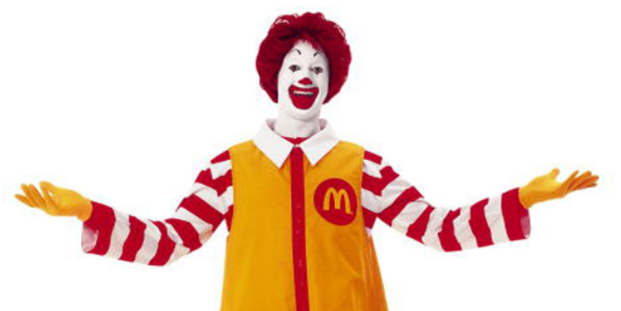 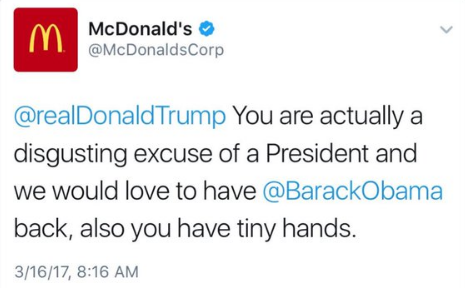 The tweet, which anyone with even the most basic critical thinking skills could tell was a hack, remained on the page for about 20 minutes before it was deleted, but not before Trump supporters saw it and FREAKED OUT.

Immediately, there was a call to #BoycottMcDonalds…

Hey @McDonaldsCorp
YOU can't just undo a tweet!!!
Since you don't support America, Americans will not support YOU!!! #BoycottMcDonalds pic.twitter.com/dOF6zbJdTA

@TheWrap @greta McDONALDS HAD BETTER RETRACT THAT DISGUSTING TWEET. OR THEIR STOCK IS GOING TO PLUMMET, JUST LIKE THEIR HAMBURGER SALES!!!

They need to FIRE someone

I guess McDonalds is ok with loosing half it customers! @McDonaldsCorp #BoycottMcDonalds pic.twitter.com/en0DeOqTSX

After the fast food chain apologized for the tweet and explained that its account had been hacked, Trump supporters refused to believe it or accept the apology…

@FoxNews @McDonalds No it wasn't. Some liberal college intern sent that out. Time to boycott these fucks

Hey @McDonaldsCorp, This IS NOT An Acceptable Apology For Posting My POTUS Is A "Disgusting Excuse Of A President"?#BoycottMcDonalds#MAGA pic.twitter.com/hQdJmaRc1f

@McDonaldsCorp @McDonalds you better have an answer for this @McDonalds this is the height of ignorance and immaturity!

@FoxNews @McDonalds I'm pretty sure it was just left open at the office and some uninformed jackass intern sent it out. Hardly a hack.

All this ridiculousness almost makes us want to eat at McDonald’s. Almost.

Related: Son Comes Out To His Father In Incredibly Moving McDonald’s Commercial

WATCH: Madonna threw a surprise party for fans in NYC to kick off Pride weekend

WATCH: Kick off pride with the exclusive premiere of Bandits on the Run’s “She’s The Queen”