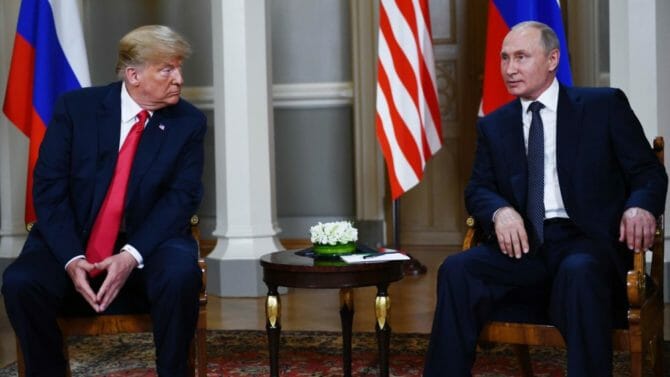 OK, if you haven’t been paying attention to this whole Trump/Putin thing, it’s time you start…

Fresh off the heels of his disastrous meeting with Queen Elizabeth last week, Donald Trump jetted off to Helsinki to meet with Vladimir Putin. After a two-hour, closed door meeting this morning, the pair held a joint press conference that Anderson Cooper called “one of the most disgraceful performances by an American president at a summit in front of a Russian leader certainly that I’ve ever seen.”

When asked whether he would condemn Russia for meddling in the 2016 election after Robert Mueller indicted a dozen Russian intelligence officers for hacking Democratic servers, Trump replied: “I don’t see any reason why it would be” Russia who did such a thing.

“I have President Putin,” Trump said. “He just said it’s not Russia. I don’t see any reason why it would be.”

He then said it’s a real shame there has to be “a little bit of a cloud over” over his election victory, saying “I beat Hillary Clinton easily and frankly we beat her,” before adding that maybe the U.S. should work with Russia to get to the bottom of the whole thing, a suggestion given to him by Putin himself.

Related: Trump’s disastrous meeting with Queen Elizabeth has been immortalized in memes

Trump then insisted there was “no collusion at all” between his 2016 campaign and Russia, and that he believes the FBI hasn’t been doing a very good job in handling the matter.

As expected, pretty much every Democrat condemned Trump’s behavior at the press conference. But it’s not just Democrats who are losing this sh*t over it. Republicans, too, are freaking out.

"My people came to me…they said they think it's Russia. I have President Putin. He just said it's not Russia. I will say this, I don't see any reason why it would be."
–Trump

That's how a press conference sounds when an Asset stands next to his Handler.

Sen. Jeff Flake took to Twitter to express his complete and utter disbelief over the whole thing:

I never thought I would see the day when our American President would stand on the stage with the Russian President and place blame on the United States for Russian aggression. This is shameful.

And Sen. John McCain issued a press statement calling it “one of the most disgraceful performances by an American president in memory,” adding that it “marks a recent low point in the history of the Presidency.”

Today’s press conference in #Helsinki was one of the most disgraceful performances by an American president in memory.

House Speaker Paul Ryan said: “There is no question that Russia interfered in our election and continues attempts to undermine democracy here and around the world. That is not just the finding of the American intelligence community but also the House Committee on Intelligence. The president must appreciate that Russia is not our ally.”