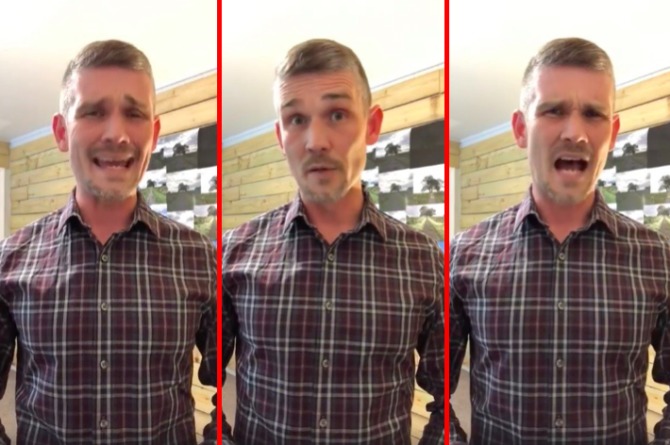 “If you’re anything like me, you’re sick and tired of hearin’ about this homosexual cake bakin’ nonsense,” Greg begins.

Well, that’s about the only thing we agree on.

Greg continues: “The LGBTABCDEFG… whatever the foolish acronym is at this particular point, they’ve gone overboard! They have fake outrage, selective drama, and why don’t they get up and try that nonsense at a Muslim bakery?!”

Greg goes on to say that he personally believes “LGBTABCDEFG” people wouldn’t sue Muslims. They’re only going after Christians “Evangelicals with actual convictions.”

“I don’t give a wooden nickel who you have sex with,” he rants. “I don’t care about your super perverted sex life!”

Um, we beg to differ.

Greg adds that gay people are “emotionally scarred” because they’re all perverts. And before you go thinking he’s some kind of a bigot or a homophobe, he wants everyone to know: He’s NOT!

He’ll just never ever ever make them a gay wedding cake!!! Then again, why would he? He’s a pastor, not a baker.

DEAR GAY WORLD, GO TO A MUSLIM BAKERY WITH YOUR FAKE OUTRAGE. #PleaseShareThis