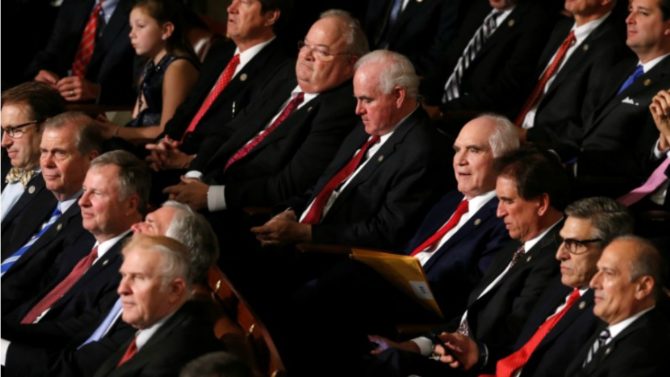 It sounds like the setup to a bad joke: 20 Republican senators and representatives walk into a bar. The bartender, Charlie Rose, asks the politicians, “So what are you having?”

They answer in unison: “Absolutely none of it.” Then they all turn white as sheets and make a break for the exit. It’s a bit of a disaster, as the doorframe is rather small and only one person can leave at a time. It looks a little something like this:

Except this analogy doesn’t even really work, since none of them would have shown up to the bar to begin with.

Charlie Rose invited 20 Republican senators and representatives to discuss former FBI directer James Comey’s recently reported-on memo that Trump tried to obstruct justice. It was the perfect opportunity for a rising GOP leader to score brownie points by offering some Orwellian spin on the president’s actions. They wouldn’t even have to really make sense, as Kellyanne Conway and other mouthpieces have shown time and time agin.

But Charlie got 20 resounding “no’s.” The White House also declined to appear.

.@CBSThisMorning reached out to 20 republican senators and representatives as well as to the White House to appear today — all declined pic.twitter.com/vIMMALxPXT

More on the memo, via The New York Times:

President Trump asked the F.B.I. director, James B. Comey, to shut down the federal investigation into Mr. Trump’s former national security adviser, Michael T. Flynn, in an Oval Office meeting in February, according to a memo Mr. Comey wrote shortly after the meeting.

“I hope you can let this go,” the president told Mr. Comey, according to the memo.

The documentation of Mr. Trump’s request is the clearest evidence that the president has tried to directly influence the Justice Department and F.B.I. investigation into links between Mr. Trump’s associates and Russia.