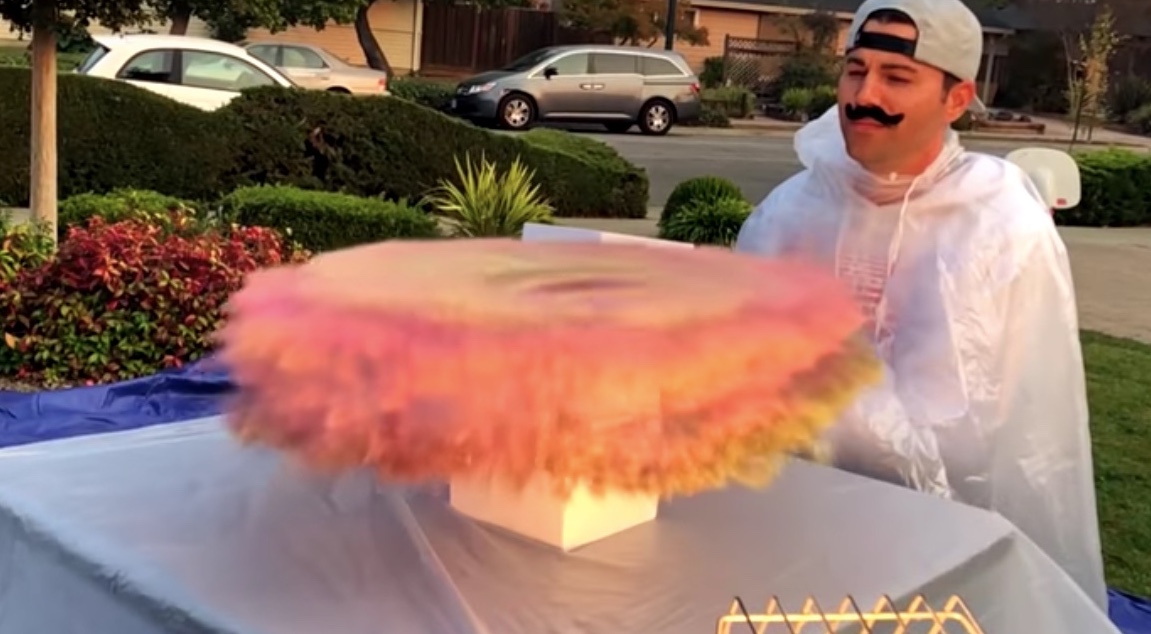 When former NASA engineer Mark Rober videotaped a neighborhood thief stealing an Amazon package from his front door, he felt violated. When the police told him it wasn’t worth their time to investigate, he felt powerless.

So he decided to take revenge into his own hands by creating a booby trap package that ejects massive amounts of glitter and fart spray as soon as it’s opened. Even better, the package records the thieve’s reaction, all for our viewing pleasure.

The package itself is a genius bit of “revengineering.” It contains a GPS-sensing chip that, when moved from Rober’s front porch, sends a signal for four mounted camera phones to begin recording. The phones were positioned to capture the thieves’ reactions from 360-degrees, no matter where they stood.

It also contained a rotating cup that shoots out massive amounts of glitter in every direction and a small machine that delivers five sprays of fart spray every 30 seconds, something which ensures that the thieves will throw the package away before they realize that they’re being recorded. Just one spray is enough to clear a room, Rober says.

Even if the thieves destroyed or dismantled the package, the phones inside still automatically upload their videos to the cloud, allowing Rober to see their reaction. The phones also allowed Rober to track the package’s location, allowing him to retrieve it and play the prank on several different thieves.

Lastly, he shrink wrapped it and put on a fake shipping label addressed from Kevin McAllister, the hero from the 1990 comedy Home Alone, to Harry and Marv, the film’s unfortunate thieves who fall prey to Kevin’s many household booby traps.

If you’re wondering why an LGBTQ blog is sharing this video, it’s mostly because we like rainbow glitter. But also Rober’s package is a sort of “glitter bomb,” an activist tactic that became popular around 2011 when queer protestors used them anti-gay politicians like Newt Gingrich, Tim Pawlenty, Randall Terry and Michele Bachmann’s conversion therapy-loving husband Marcus.

We honestly haven’t heard of anyone being glitterbombed since around that time — queer dance parties seem to be the modern-day protest of choice.

As such, Rober’s glitterbomb is the most high-tech we’ve ever seen. And many Twitter commenters are hoping that he starts selling them.

I think our friends at @amazon needs to see this.

You’ve apparently never had a glitter accident. A friend sneezed in her glitter face powder once and were still finding it on her clothes…

Laser printer toner would be even better. That stuff is practically impossible to clean up.

Oh. My. Gods. This is. Amazing. I’m so proud to know you. pic.twitter.com/3EIx6DdCNs

I read that someone who had a package stolen started leaving an amazon box filled with used cat litter on their porch. So it served a double purpose in getting rid of the poopy litter and a nasty surprise for the thief. Low-tech, but it works, too! ?