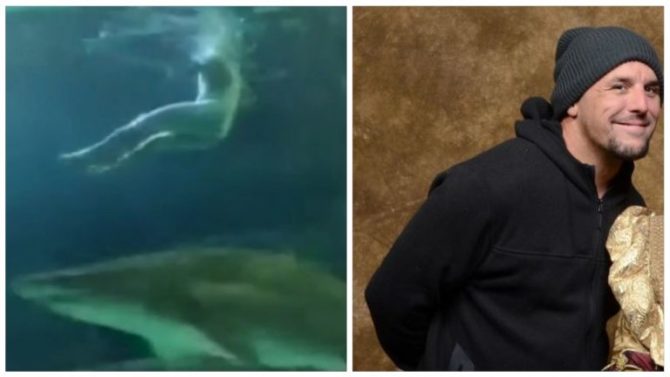 Cameras have caught a naked man swimming in a pool with sharks, and for once, it didn’t happen in Florida.

Toronto police want help tracking down a man who dove into a shark tank naked at the famed Ripley’s Aquarium. Authorities have used the footage to identify the man as David Weaver, 37, of Nelson, British Columbia.

“According to internal surveillance video, the individual in question entered Ripley’s Aquarium of Canada shortly after 10 p.m. After purchasing a ticket, he immediately disrobed and proceeded to climb over the security barrier into the exhibit,” Ripley’s said in a statement.

Weaver jumped in the shark tank around 10:30pm, swimming around before aquarium security asked him to leave the tank. Weaver initially complied, but then jumped back in on the main floor of the aquarium before a stunned and giggling crowd. He then exited the water, got dressed, and left the aquarium.

Police also have connected Weaver with an incident at Medieval Times restaurant earlier the same night. Restaurant staff escorted him from the building for disorderly conduct. He then returned to the building and kicked two glass doors, shattering them. He also assaulted a 34-year-old man outside the building. His victim had to seek hospital care for his injuries.

Perhaps a remark by one of the onlookers in the recorded video best encapsulates our feelings on Mr. Weaver’s activities: “Way to go, dumbf*ck!”