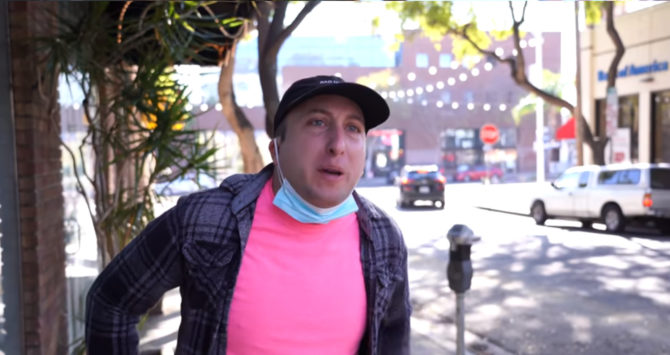 Leave it to the always-reliable Michael Henry to savage gay life in the most hilarious way possible. In his newest video, Henry takes on gays skeptical of a COVID vaccine, and those who jaunt off to Puerto Vallarta to party during the pandemic.

The video opens with Henry admiring some wood (no surprise there). He runs across his friend Randy who has just returned from a Puerto Vallarta circuit party, and who has some major skepticism when it comes to vaccination.

“Honey, you smoke cigarettes,” Henry observes of his friend. “I’ve seen you do key bumps at the urinal. You’ve been known to take those little blue penis pills they sell at the gas station checkout…You’re already doing all these risky, potentially life-threatening things but you’re against getting inoculated?”

“Who knows what’s in [the vaccine]?” Randy wonders in reply.

Randy then recounts his adventures in Puerto Vallarta, and the number of cosmetic injectables he absorbed in preparation. Micheal won’t stand for it.

“You trust partying in Mexico, circuit parties, Botox, 4-Loco, key bumps from strangers, and little blue penis pills you buy at the gas station, but you don’t trust the COVID vaccine?” an indignant Michael asks.

“My brain is leaking out of my skull,” he declares. “You’re making it do that.”

Amen, Michael. We’re right there with you.