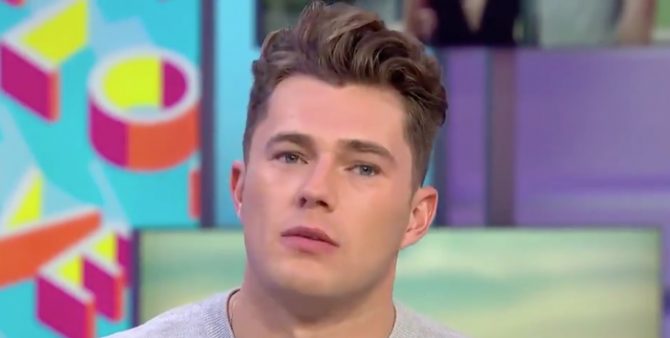 A recent interview with Love Island’s Curtis Pritchard has not gone over well with Good Morning Britain viewers.

Pritchard made headlines this week when he said he “wouldn’t rule out” a relationship with a man. “You can never put a label on anything,” he said. “It’s a cliche to say, but love is blind. I can never ever say what will happen in the future.”

The hosts of Good Morning Britain pressed him on the comments, clearly wanting him to do the one thing he expressly said he didn’t want to do: label his sexuality.

Related: Reality star says he “wouldn’t rule out” being with a dude

“The future’s a road which is unwritten,” he reiterated. “Nobody can ever say what’s going to happen in the future, really. Last year, would I have ever said I’d be on Love Island? No, and this year I was on Love Island.

“So, I never want to label what the future’s going to be, because I don’t think anyone can ever really do that. So, all I want to say is I’m 100% comfortable where I am now in my relationship with Maura [Higgins], and it is moving in the correct direction.”

That led one host to ask him if he’s bisexual.

Related: Lizzo doesn’t fit neatly into any labels, and she’s helping the world to follow suit

‘I never want to label what the future is going to be because I don’t think anyone can really ever do that.’#LoveIsland's Curtis Pritchard addresses rumours about his sexuality. pic.twitter.com/RsAPJxo6sY

The exchange prompted plenty of criticism, with many feeling that the line of questioning was disrespectful given the fact that Pritchard was crystal-clear that he wasn’t going to label himself.

“Let this guy live his life, if he’s bisexual or ever gets with another male then so what? It’s 2019 things like this should be widely accepted,” wrote one viewer.

Another commented: “This was a toe-curling, cringing interview and I would have thought Kate Garraway and Adil Ray would have conducted theirselves more professionally.”

This was a toe curling, cringing interview and I would have thought @kategarraway and @adilray would have conducted theirselves more professionally. Shameful and totally unnecessary!

Disgraceful interviewing. I love GMB, but to badger someone constantly about whether they are gay or not is not professional. If he is then so what? He handled it perfectly. @CurtisPritchard

Awful interview bordering on harassment. They kept at him but he kept his cool. ????

he shouldnt have to label his sexuality and people shouldnt keep speculating.

Let this guy live his life, if hes bisexual or ever gets with another male then so what? Its 2019 things like this should be widely accepted.

That was shocking behaviour from @adilray And @kategarraway, interview, more like interrogation.