Anyone wanting to celebrate LGBTQ History Month with a bit of queer history should look no further than Equal, the outstanding new anthology series from HBO Max. Out directors Stephen Kijak (Sid & Judy) and Kimberly Reed (Dark Money) helm each episode which features stories—some famous, others overlooked—with a mix of documentary and narrative segments. The latter also utilizes possibly the most amazing LGBTQ cast ever assembled, with performances by Keynan Lonsdale, Samara Wiley, Sarah Gilbert, Jamie Clayton, Anthony Rapp, Theo Germaine, Sam Pancake, Jai Rodriguez, Hailie Sahar and more, each aimed at capturing the life and spirit of queer heroes. It’s a must for anyone with any interest in the history of the community, and let’s face it: if you’re reading this now, you owe it to yourself to watch.

Speaking of Anthony Rapp, the actor returns to his role as Lt. Paul Staments in the new season of Star Trek: Discovery this week. We’re happy to report the show has also upped the ante on LGBTQ inclusion, casting trans and nonbinary actors Blu Del Barrio and Ian Alexander in new, recurring roles. We’ve also seen the first four episodes, and can report with certainty, this is the absolute darkest Star Trek has ever dived. Following the events of Season 2, the Discovery jumps 1000 years into the future, into a time when the Federation has fallen and the galaxy lays in ruins following a mysterious event known as “The Burn.” This new premise takes Gene Roddenberry’s concept of a space western to a new extreme, and allows the writers to integrate more of the Next Generation-era mythos to the series. Season 3 will likely divide fans over its dark themes and violence (which is also nothing new for Discovery). That said, we found its Battlestar Galactica overtones quite arresting and look forward to exploring these strange new—and very queer—worlds.

The Legt: The Pasadena Playhouse Online

For anyone missing the thrill of live theatre, the Pasadena Playhouse offers the next best thing this week, as it launches the new Roku/AppleTV app PlayhouseLive. The app will allow viewers to watch HD recordings of some of the Playhouse’s recent productions, including Jerry Herman: You I Like, a new revue dedicated to the openly gay composer of Mame and Hello Dolly. PlayhouseLive will also feature new educational and behind-the-scenes content, including Page to Stage a documentary series detailing the aforementioned production of Little Shop of Horrors starring MJ Rodriguez . Since we can’t get back into live theatrics anytime soon, and given the Playhouse’s reputation for excellence, we look forward to watching.

PlayhouseLive is available for AppleTV, Chromecast and Roku.

We stumbled on this British indie drama from director Peter Mackie Burns last month when it enchanted us with its mix of domestic drama and sexual thrills. Rialto follows Colm (Tom Vaughn-Lawlor), a working-class man recovering after the death of his father. As he struggles with restructuring at work, an emotionally needy mother, a pair of distant teenage kids and a lifeless marriage, he happens on Jay (Tom Glynn-Carney) a teen prostitute who propositions him in a public bathroom. What begins as extortion slowly evolves into a doting and tender relationship between the pair, as Colm finds himself able to be emotionally honest for the first time. As with a number of erotic thrillers—Blue Velvet and Sauvage/Wild come to mind—Rialto raises questions about how much fear and danger can add to sexual allure. It also benefits from a fantastic performance by Vaughn-Lawlor, who injects his character with the right mix of tenderness and desperation. No doubt the final confrontation scenes will leave viewers both moved and horrified.

As the celebration of Queer History Month continues, join GLAAD and a host of celebrities keeping up the fight to end bullying with a special Spirit Day celebration. Throw on something purple this Thurdsay, and join like likes of Cher, Halle Berry, Jazz Jennings, Adam Rippon, Sterling K. Brown, Shangela and Peppermint by posting anti-bullying messages on social media, and sharing the remarks from GLAAD’s celebrity ambassadors. It’s an online party for a good cause.

The Jam: ONR “Must Stop”

We’ve fallen in love with ONR’s latest single about falling in love with the absolute wrong person. The lyrics to “Must Stop” concern someone who has gotten hurt multiple times over the years in a series of unhealthy relationships. The smooth rock-pop track, which also features vocals from Sarah Barthel of the rock band Phantogram, alternates between total despair and giddy hope; we’re not sure if ONR is laughing at himself, or crying, or just going nuts. Hey, who hasn’t had a relationship like that? 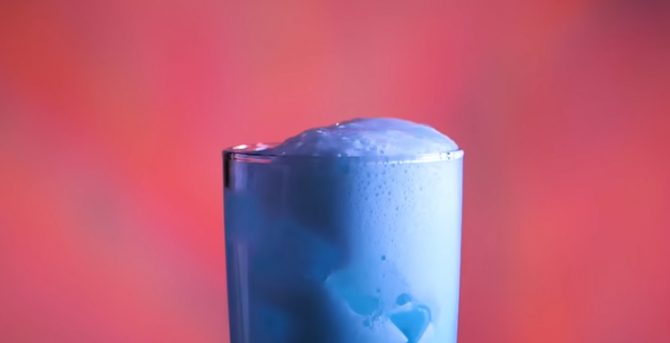 In honor of the return of Star Trek: Discovery with some extra queers aboard the ship, we recommend this not for the faint of heart libation that recalls both the eye-popping colors of the original series and all the times you might have fallen asleep slightly intoxicated whilst watching an old Trek rerun. Don’t act like you haven’t…

Mix egg, liquors, juice and syrup in a cocktail shaker with ice. Shake well. Pour into a cocktail glass over ice and top with tonic water.