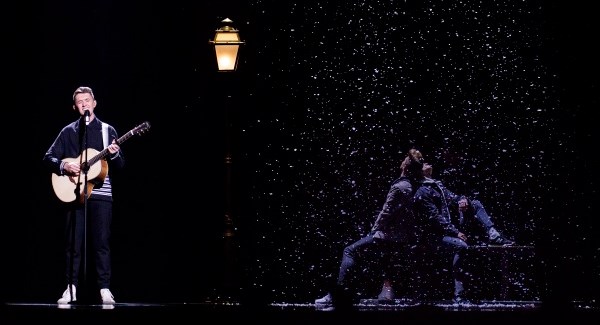 So Valentine’s Day (or Single’s Awareness Day, as the case may be) arrives again this week. No doubt, regardless of relationship status, we all could use a little nookie, and a few songs to put us in the mood.

These videos all depict same-sex love, sometimes long before the Ellen, Will & Grace and marriage equality helped remove the stigma around a certain kind of lust & love. Have a look and a listen, then find someone wonderful to smooch.

Or, failing that, at least some music to listen to while laying on the couch and eating Velveeta out of the box.

O’Shaughnessy had us swooning at the release of his video for “Together,” which followed the tribulations of a same-sex couple strolling through an Irish city. He further caused a sensation with his Eurovision performance which also featured a same-sex couple dancing (as in the video, played by Alan McGrath and Kevin O’Dwyer). O’Shaughnessy, who sadly is not gay, may not have won the top prize at the contest, but he certainly won a good deal of attention, and for a good cause.

Though Britney Spears may have the bigger gay following, her longtime rival Christina actually may have done more to further the cause of queer rights. Ms. Aguilera had one of the biggest hits of her career with “Beautiful,” which featured a very steamy make-out between two men and a transgender woman wrestling with issues of self-love. Almost 20 years later, we still get misty eyed.

The notorious ONJ topped the pop charts with this sexually charged anthem back in 1981. Even more shocking: the video took the carnal charge to an even higher level, as it featured Newton-John dancing with scantily clad men in a locker room shower and a gay couple leaving the gym hand in hand. Go figure that most airings of the video at the time clipped out that bit.

4. Hayley Kiyoko – What I Need

Actress and K-Pop siren Kiyoko has shocked the world more than once with her music—and their accompanying videos—featuring overt same-sex themes. Our pick for the highlight: “What I Need,” which features the singer dueting with Kehlani. The two also play a very attractive couple in the video, which helped land Kiyoko on Queerty’s 2108 Pride 50 list.

Related: Olivia Newton-John Is Still The One We Want

5. Kylie Minogue – All the Lovers

Perry arrived on the pop scene with her blatantly bi-riffic anthem “I Kissed a Girl.” She later waded back into our territory with her dance hit “Firework,” the video of which featured a teenage boy getting up enough courage to kiss another boy at a club. For many, the scene evoked familiar memories and provided a subtle pat on the back for learning to be ourselves.

7. Billy Winn – If You Really Cared

Ok, he’s a relative newcomer but we wanted to include indie electronic artist Billy Winn, who prides himself on including homoerotic themes in his music. His latest single “If You Really Cared” keeps with that theme, as underlined by its accompanying video. Much as the song opines on relationship frustrations, the video depicts two men trying to wrangle their feelings of anger and affection. So many of us know exactly how that feels.

Queer sister Janelle made a splash when she released this celebration of the vagina—seriously–as a single in 2018. The corresponding video carries the analogy even further, featuring the singer/actress in a pair of pink billowing pants made to resemble the female anatomy and some intimate flirtation with fellow bi actress Tessa Thompson.

We’ve had a crush on Keynan for a long time, though never more than when he released this R&B track about how much he loves to kiss boys. The video for the song featured plenty of smooching between same-sex couples as well, with the ever-hunky Lonsdale flaunting that he’d come to terms with his own fluid sexuality.

We couldn’t leave out this R&B tune which happened to arrive at the height of the push for marriage equality. Naturally, since the song is about same-sex love, gay couples appear on screen throughout the video. Ditto Macklemore’s Grammy’s performance where Queen Latifah presided over a group marriage ceremony which included gay & straight couples. It still ranks as one of the great moments in Grammy history.

Matt is another relative newcomer, but the combination of the gorgeous landscape and the sincerity of the sweet queer love song caught our attention. (Plus we love mandolins.) The video was shot on location in Vancouver with a team of dancers and choreographed by Vancouver choreographer Marcel Tremel. It features a same-sex couple dancing in Stanley Park and at Kitsilano Beach while Matt strums a mandolin and sings of an ephemeral lost love.