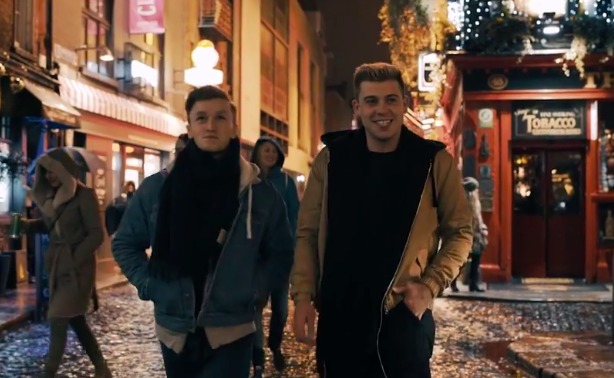 Who He Is: Actor & Singer/Songwriter

What He Did: O’Shaughnessy represented his native Ireland in Eurovision. Along with Mark Caplice and Laura Elizabeth Hughes, O’Shaughnessy composed “Together,” which he performed live to an international television audience. Ultimately, he reached the finals, placing 16th.

Related: Eurovision singer advances to finals with gay anthem and no one is more excited than this dude

Why We’re Proud: “Together” ignited Eurovision for one simple reason: It was a beautiful same-sex love song, underscored by a slick video of two young men romancing through the rainy streets of Dublin.

As he told The Independent:

Having a gay couple was really important. This is coming from a straight man – a lot of people asked me why I was doing it if I’m not gay. It’s because my nephew could be gay, or my kids could be gay.

Only 5 days left on this tour.. I’ve actually had such a blast playing in over 20 states for 9 weeks! And I have had the opportunity to meet some of the coolest people in the process. I believe life’s too short for safety, you’ll never know unless you try and I haven’t worked a day in my life because I love what I do with all my heart. So now I go from one life changing experience straight onto the next! Thanks for being here and supporting my music! ?? ?? ?? ? @_ashmiller ? @dimondclothing

Score one for the allies. We’d love O’Shaughnessy just for the sentiment and video. But in the Eurovision competition, he took things a step further for an international audience desperate for messages of love and acceptance in a dark time.

For his performance of  “Together” on the Eurovision stage, O’Shaughnessy featured a gay couple–the same actors who play the couple in the video–doing an interpretative dance of the number, which prompted the audience to raise Pride flags alongside the Irish banner. The move attracted worldwide attention.

In China, broadcasters refused to air the song, which kicked off a backlash in Europe. The European Broadcasting Union terminated its partnership with Mango TV, the Chinese network carrying the Eurovision contest. EBU issued a statement saying that the censorship of O’Shaughnessy’s song violated its “values of universality and inclusivity and its proud tradition of celebrating diversity through music.”

Thus did an Irish anthem become a worldwide gay anthem and a protest against censorship. The song also catapulted O’Shaughnessy and Ireland into the finals, where the singer placed 16th.

It all kind of makes us want to break into song.