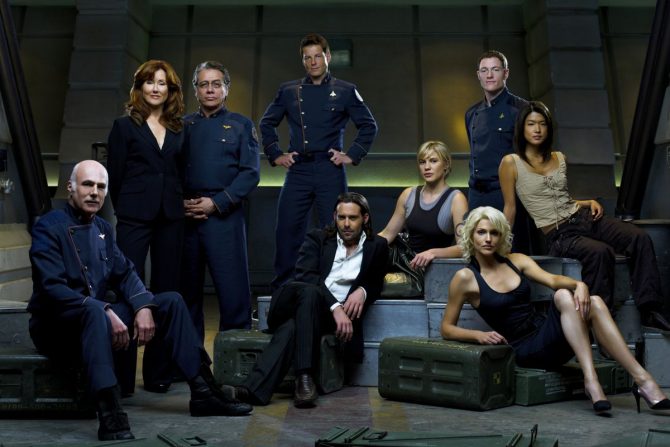 Scary how a reality show presidency and a global pandemic can make us opine for the bygone awful days of George W. Bush, no? Fortunately, the queer community, along with the rest of the world, made it through those days, albeit barely. As a reminder that this too shall pass and yes, things can get better, we offer up the best sci-fi series of the new century: Battlestar Galactica. Don’t let the title, or the original 1970s camp series fool you. Galactica is the defining series of the Bush/Iraq War era.

Mankind has colonized 12 planets known as the “twelve colonies,” and created humanoid robots called Cylons for slave labor. One day the Cylons rebel, sparking a bloody intergalactic war. After a long conflict, the Cylons vanish from the galaxy. 40 years later they return and launch a sneak attack on the colonies committing mass genocide: less than 50,000 people remain in the entire universe. The series picks up following the attack, as the last military ship, the Galactica, leads a convoy in search of a new home with the Cylons in hot pursuit.

Battlestar Galatica touches on themes of terrorism, war, racism, religion, sexuality and gender as well as finding hope in the face of despair. With a cast that includes Oscar-nominees Mary McDonnell and Edward James Olmos, as well as Katee Sackoff, Grace Park, Dean Stockwell, Lucy Lawless and James Callis, the series helped create the concept of serialized storytelling on TV, with one episode often leading directly into another. Queer characters and relationships appear as well late in the series, in the form of a bisexual polyamorous love triangle, and a pair of lesbian pan-species lovers. Dark, thrilling and addictive as hell, we can’t think of a better show to watch during lockdown.